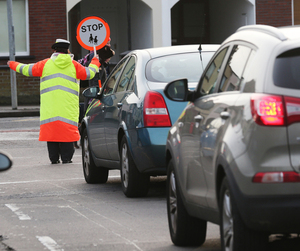 I’ve recently tabled a number of motions to Cork City Council. They relate to parking and speed levels outside of schools. I suspect they may prove contentious.

I hope they are. They are meant to stimulate debate, to effect even the smallest degree of cultural change.

On speed I’m suggesting that we have 20km per hour zones within 500 metres of a school entrance. This may sound slow but it could be seen as an increase – the average rush hour speed in urban areas is about 10km per hour.

On parking I’m proposing that there should no parking (other than disability parking) within 250 metres of a school entrance. The intent of this would be to avoid the rugby scrum approach to parking, that is seen around most school gates most days.

Walking that additional half a kilometre may also bring some incremental health benefits for our children.

In my school going days (sometime in the last century) we walked or cycled to school. I was lucky to live no further than seven to ten minutes from the schools I attended.

Spatial patterns have changed enormously since then. Suburban living has forced many to live more distant from, what traditionally had been, adjacent community facilities.

Growing traffic volumes have created greater safety concerns. Because of these fears parents, these days, are less inclined to let their children walk to school. Certainly less inclined to have them cycle.

This has created what must be the ultimate irony. Fears have increased of having young students walk or cycle because of traffic volumes; volumes that have been vastly augmented by cars driving these same students to and from schools.

And we have become a time poor society. The school run in many households has become something of a military operation. Circuitous routes from creches to preschools to primary and secondary schools, and eventually to the workplace, have to be done each day with precision.

We need to make space to lessen this ordeal. Convincing decision-makers that we have to think differently to bring about different results, is proving to be the biggest obstacle in bringing about change.

What should be obvious remains oblivious to many. We can’t continue with policies that do nothing but contribute to the madness.

What is also important is that change is not seen to be imposed, but comes about through proper consultation.

Recently in the Norwegian local elections an anti-congestion charge party achieved a strong vote from a standing start. The Gilets Jaunes in France have shown how reactive people can be when they haven’t been properly consulted.

What I’m not expecting is any common understanding that continuing on as we are doing is crazy.

Cars are tools, such tools cannot and should not determine our behaviour. If anything confirms Einstein’s definition of insanity of doing the same thing over and over and expecting different results, it’s our constant deference to the motor car.

When it comes to making sense of the school run, you would have thought we would have learned better by now.

28 thoughts on “Dan Boyle: Driving Each Other Crazy”