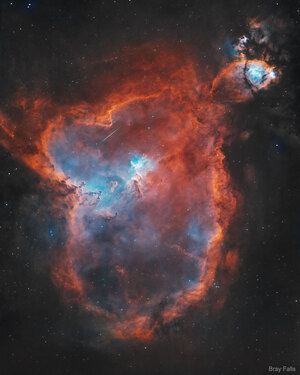 Behold: IC1805 – an emission nebula shaped rather like the human heart (after which it is named) glowing brightly with the red light emitted by its most prominent element: hydrogen. To wit:

The red glow and the larger shape are all powered by a small group of stars near the nebula’s centre. In the centre of the Heart Nebula are young stars from the open star cluster Melotte 15 that are eroding away several picturesque dust pillars with their energetic light and winds. The open cluster of stars contains a few bright stars nearly 50 times the mass of our Sun, many dim stars only a fraction of the mass of our Sun, and an absent microquasar that was expelled millions of years ago. The Heart Nebula is located about 7,500 light years away toward the constellation of Cassiopeia. Coincidentally, a small meteor was captured in the foreground during imaging and is visible above the dust pillars. At the top right is the companion Fishhead Nebula.

3 thoughts on “I Heart Nebula”