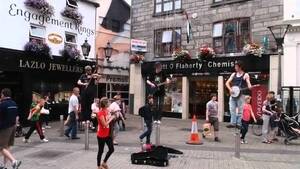 Galway city’s  busking bylaws will come into effect from January, banning “any use of amplification from use before 6pm, restricting where acts that can attract a crowd from performing, and require performers under 16 to have a parent or guardian present.

“A street performer shall not act, say, do or sing anything likely to cause alarm, distress or offence to any member of the public, business owner, the Council, or any memberof An Garda Síochána.”

Despite the Alderman, his head a sweaty pink moon,
who wanted travellers castrated,
or at least kept behind an electric fence.

Despite the former Mayor who liked to taste
the thighs of teenage boys in a local pub’s
musty meeting room and wore
his ceremonial robes while doing it.

Despite the motion you passed overwhelmingly
against contraceptive devices and students
engaging in sensuality without responsibility.

Despite the fortune one of your number got
from coffin ships his grandfather
profitably fed to the starving
Atlantic sharks.

Despite the “dastardly” Rising
at whose failure you rejoiced and the diamond
welcome you gave Edward the Seventh.

Despite the lines of white powder expertly
inhaled off a professional lady’s
clavicle which none of your number
knew anything about.

You are inoffensive as a fairground
run by defrocked priests in grey raincoats;

inoffensive
as a former Mayor owning
a seafront casino that took
the pensions of passing widows,
the disability benefits
of bald guys with the shakes;

inofuckingffensive
as a line of giant white puddings
who’ve calamitously been
let talk.

I am offering the words of this poem to any busker who want to turn it into a song and sing it on Shop Street….

Pic via You Tube

10 thoughts on “For The Galway Buskers”