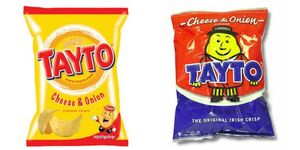 A County Down trader who breached Northern Ireland crisps giant Tayto’s trademark by selling the same name brand from the Republic, may be liable for damages.

Ballynahinch man Mark Ferris accepted the infringement at the High Court in Belfast.

The sole trader claims he only made around £500 profit from the sale of Tayto crisps manufactured in the Republic to shops and pubs north of the border, a judge was told.

His lawyer argued that the Northern Ireland company was “using a very large sledgehammer to crack a very small nut” in seeking a further hearing to examine any potential financial compensation.

But counsel for the firm based in Tandragree, Co Armagh insisted it was about protecting its trademark.

Oz It For This?