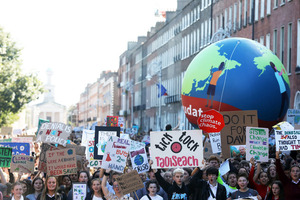 Amidst all the commentary on the millions-across-the-globe Friday climate change strike, one remark was striking: we should be very afraid.  Certainly, failure to contain the rise in global heating will wreak devastation. And the United in Science report makes for unnerving reading.

However, fear may not be the best way to mobilise people into action. A better way is to show how climate repair will actually make life better and improve our living standards beyond just avoiding global meltdown.

In other words, the policies to address the climate emergency will actually result in a more prosperous society.

Take a carbon tax: if this were increased without a robust compensation mechanism, it will further degrade the living standards of low and average income households. However, if it is accompanied by a Carbon Dividend – or a ‘climate income’ – things change.

Low and average income groups are likely winners and income inequality is reduced. In that context, the carbon tax could then do what it is supposed to: reprice carbon to remove externalities (i.e. remove the massive subsidy fossil fuel extractors receive from a failed market) and provide environmentally-sound incentives to investors and innovators.

So what climate repair policies can actually make things better? Here is a small list – no doubt there are other and better examples.

Public transport is key to reducing emissions and congestion. So why not make it free? This could induce more people out of their vehicles, provided there is capacity and access. Looking at the experience of other European cities, free public transport can have a transformative impact on mobility and life quality. And it would especially benefit low and average income groups given that a month’s pass in Dublin costs €140.

Ban or limit private cars into city centres. Again, this could induce people to use public transport, while recapturing the city streets for people . Cities throughout Europe are taking initiatives, from outright bans to bans on weekends to extending pedestrian zones.

Well, free up front. One of the problems with the current grant system is that only those with enough money can take advantage of the grant. So why not make the retrofit free upfront with repayments linked to income or ability to pay. The full cost can be recovered when the house is sold or disposed. This could be funded by a National Housing Bank (similar to the bank Fine Gael proposed under their NewEra proposals) and include solar panel installation and fuel pumps. Further steps would be to require retrofitting when a house is sold or transferred.

Similar to retrofitting, grants and tax breaks for electric cars benefit higher income groups who can afford such vehicles. So why don’t we substantially subsidise the purchase of electric cars with repayments based on income and the balance cleared upon disposal of the car? In the first instance, we could initially target this programme at rural dwellers, since they will be disproportionately impacted by a carbon tax. This would have to be done alongside a rollout of a recharging infrastructure.

Greening urban areas has a multiple of beneficial effects – from health to climate change to improving the overall liveability of our neighbourhoods. This is where community democracy can play a driving role – neighbourhood councils established to draw up local plans for greening, design and planting. This should come with sufficient resources to realise these plans (e.g. Munich local government provides grants to households to dig up hard surfacing and replant their gardens).

The Green Party has proposed a Just Transition Commission in their Just Transition (Worker and Community Environmental Rights) Bill. This would be a significant step forward. But we can go further.

There will be job losses across a range of sectors. A fund could be established to ensure that anyone who loses their job due to decarbonisation would be entitled to their full wage for a an extended period to facilitate re-training, new employment opportunities, or moving to a new job – a Green Guaranteed Income.

This would not only provide security for workers, it would maintain their spending power which would help protect employment in other sectors (e.g. retail).

Another new feature would be a Green Examinership – a process by which a failing company (due to decarbonisation) is given legal protection to allow its workforce to come up with proposals to convert production to renewable or sustainable goods and services.

When we think about climate repair we tend to think of either government policy or individual action. We have to bring the productive economy into this debate.

Every business with more than 50 employees (this threshold could be lower) should produce an annual joint environmental audit between management and employees, emphasising environmental innovation in new processes and / or products. The Strategic Investment Fund could be re-orientated towards green innovation to assist in this. Let people in and let a thousand ideas flourish.

The advantage of these policies is that they would be good in and of themselves. That they can help in pursuing climate justice and repair makes them win-win. There are more policies that could be introduced to achieve this beneficial impact:

To shore up low incomes we could consider a partial Basic Income, the Living Wage and collective bargaining – all of which can boost living standards.

Considering that some things may get more expensive (e.g. food), we should be reducing costs in other areas such as housing with cost-rental and cost-purchase housing.

Reduction in working hours (the 30-hour working week) can contribute to climate repair through a reduction of our carbon footprint (the fewer hours worked, the better).
Of course, the first question in response is how much will it cost?

The problem is we have no baseline for the cost in the scenario where we do nothing or very little. Therefore, we can’t make comparisons. So let’s just work out costs based on where we are now.

Many of the above have few cost implications: guaranteeing people’s income in the case of climate-related job loss (a 0.2 percent increase in social insurance), car-free city centres, etc. Some of the proposals could actually raise revenue by driving productivity (the 1000 ideas, green examinershp), while subsidising retrofitting and electric cars would be debt-financed by households over the long-term.

Even so, a truly Just Transition will have significant costs. For instance, free public transport would cost over €600 million – and this doesn’t count the cost of increased demand and capacity (thanks to @Sean_Fearon for pointing out this PQ).

The Government should conduct a thorough analysis of what the CSO describes as ‘potentially environmentally damaging subsidies.’

In 2016, through direct spending subsidies and indirect tax reductions, we spent over €4 billion in 2016 on such subsidies. It should be noted that these are potentially damaging, and many of the subsidies are social supports (fuel and gas allowances, subsidies to disabled drivers, etc.).

This means that it is far from a simple matter of ending the subsidies and redirecting the money towards green investment. However, in the first instance, the Government should identify which subsidies are definitely damaging.

Warmer houses at lower cost, living city centres, retrofitting and electric cars accessible to everyone, green towns and cities, income guarantees and employee-driven innovation – the transition to the new energy, production and consumption regime needed to combat climate change will contain many challenges.

But in so many areas we can show that the transition can be Just, spreading real benefits to everyone.

This is a programme capable of mobilising society around a new and progressive consensus.