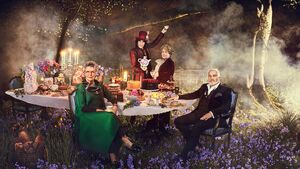 Great British Bake-Off viewers were transported back to the roaring 1920s in the fifth episode of the Channel 4 series.

I loved the theme especially the idea of a Cocktail Cake, but to the veteran Bake Offender and Hollywood watchers the ending was predictable from early on; the Hollywood’s facial expressions pretty much gave the game away anyway.

But the brilliance of Bake- Off is that sometimes even knowing the ending doesn’t matter, and it certainly didn’t ruin Roaring Twenties’ night for me.

The moment Helena said lavender I could feel the Hollywood’s eye roll so didn’t really need his this isn’t going to end well smirk as he moved on to know how he really felt.

Serious contenders for this competition would know by now Paul Hollywood has no grá for lavender.  (He’d be right at home in my house; I can’t stand it either.  It smells nice in the garden tho’.)

The only thing that could save Helena after that was a showstopper to make him forget she put soapy custard in front of him the day before.

Now I have stood by Helena up to now, but in the end she just took the Halloween shtick too far.  By last night it was silly, sloppy and childish.

But worse again, she ignored the task and snubbed the theme of the week, so she had to go.

Over the years of this series people, and especially rejected bakers, read too much into the Technical, but they only count when it’s a close call; I suppose you could call them the photo finish of the Bake-Off Tent.

And last night’s, ah here Technical, Prue’s fried choux balls pretty much had the batens’ of everyone, so I knew it would be the double elimination show.

I know choux makes a fool out me all the time.  But in all fairness, how could a sauce with three ingredients – one of them liquor get so badly mangled.

I am not surprised to see Michelle go either since all parts of her weekend were Depression-era stuff.

Steph’s has been my champion since week one, and when I saw that razor thin pastry last night I knew she was on the Star Baker short list again.

Even though it was David who got the Handshake last night; I’m still not convinced but I do like his recipe and they were Flappertastic looking; too good looking to eat maybe.

So that’s two HH’s and we’re halfway through so they must mean something and I’ll never question or doubt Paul Hollywood.

All through the show Michael looked in need of an assistance animal or something to relieve his anxiety.  Star Baker in Bread week and the first Handshake of the season ffs, he needs to get a grip on himself now if he’s to do himself any justice.

His baking is definitely final level stuff.  And last night, now I tried to get video it from the telly but I made a mickey of it, but when he introduced his signature Lime and Mango tarts the Hollywood was visibly smacking his lips.

See Helena, Michael did his homework, Lime is one of the Hollywood’s favourites.

And so did Steph – I am totally drooling over her Lime sponge Showstopper and totally deserved a Handshake.

Her recipe says it needs skill, but that really only applies to the decoration; and shur’ since when do we decorate to match the picture on the recipe?

Henry the tie man and Pirya are still in it, so them surviving last week was no fluke.

And a back-to-back for my shout out Steph Star Baker was well deserved last night, I really saw no other contender after David’s showstopper sagged.

Dr Rosie went to great lengths with her Impressive Domes, went one further by showing tribute to what custard pies are more known for, slapstick splat.

So much for my earlier reservations as she showed some real class in both her signature and her showstopper, so much so I was really hoping to have her White Russian Cocktail Cake recipe for ye today.

That’s it folks, if ye’re up to it lets hear what your own Cocktail Cake would be, and in the meantime Tip of the Week: ‘water’ spray on the drizzle, thank you Henry.

Next week: Desserts, or as gaeilge, Afters, so till then; BAKE! 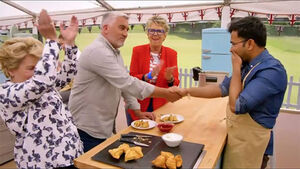 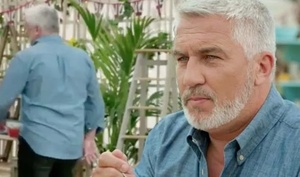 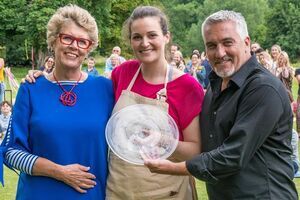 23 thoughts on “Custard Pies And All That Jazz”