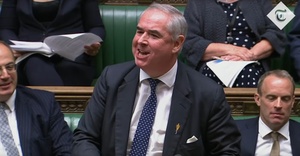 “Denying the electorate the chance of having its say this Parliament is a dead Parliament. It has no moral right to sit on these green benches.

Twice they have been asked to let the electorate decide whether they should sit in their seats while they block 17.4 million votes, this Parliament is a disgrace.”

Boris Johnson will attempt to force through General Election for third time, Geoffrey Cox indicates, as he accuses MPs of ‘cowardice’ (Telegraph)

Go To Work On An Exit