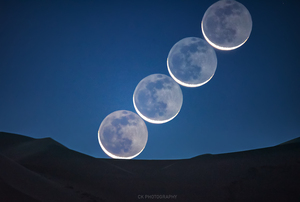 Behold: the sunlit crescent of da Vinci glow caused by earthshine (light reflected from a bright planet Earth) on the moon. To wit:

..a description of earthshine in terms of sunlight reflected by Earth’s oceans illuminating the Moon’s dark surface was written over 500 years ago by Leonardo da Vinci. One lunar month ago [this] da Vinci glow was captured in stacked exposures from the Badain Jilin Desert of Inner Mongolia, China. This year marks the 500th anniversary of Leonardo da Vinci’s death.

The Whole Of The Moon