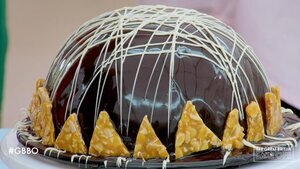 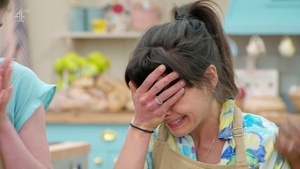 I could easily have been in that tent last night with the running commentary that was going on; Ah Priya that looks like a faded Wexford Jersey …. too many nuts Steph

You’ll already recognise why I’m singling out those two. It was absolutely Priya’s turn to go no matter what she got up to last night.

In fairness we’ve all had good days and bad bakes, yet each sending off to the Extra Slice this year has kept in sync with their rankings; well with my 1-13 anyway.

Even if the Handshakes aren’t.  Jesus Christ give her a handshake ya bollix.

Would you have preferred a Hollywood handshake or your third Star Baker?  Well if it’s of any use to you, I couldn’t tell you what I’d pick either, but I do think the Hollywood was being a prick about it last night; and he has only given out two over 18 by x no. of bakers so far.

Even if her Signature Eton Mess Meringue Cake had already placed her in the running for Star Baker, Steph was definitely short changed by the Hollywood for her showstopper Bombe just as much as she was last week with her Sour Lime Cocktail Cake.

And now, since we’re entering the business end of this season in the tent, a quick bit of Star Baker revision wouldn’t do any harm.

The Three-in-Row Star Baker was previously achieved, in season five, the Ice Cream – Freezer gate one, Richard got five in total, and his last three were consecutive.

An important note to add about this little Bakeoff’ricity is that he didn’t win the final.  Nancy did. Who oddly enough, only got one Star Baker, week one – Cake week, which is exactly where Alice is.

So, Steph keep it to together girl.

Speaking of keeping it together, Michael was definitely in better shape last night. So I’m still singling out Steph and Michael for the final, and maybe Alice – based on previous like

A quick word about last night’s Signature It’s great to see every day bakes being featured; especially ones that can be adapted, tarted up or dressed down, no matter what the occasion or what’s in the press.

Meringue is every baker’s best shout when caught short; the only problem with Meringue is that it’s fussy about who it works best with.

So David and his Cloves should have a clatter from Paul.

Actually you could tell desserts weren’t his thing anyway, and you know, I’d say he was already planning his work out to shift those Meringue Cake calories –

And that makes him a Fake Baker in my book; send him home next Paul.  I don’t care if he’s got a handshake.

You can’t call yourself an amateur home baker and get to this level without being one of us; it’s all about desserts and the treats, and the sugery chocolately creamy stuff, and always, always worth the calories.

A quick note specifically to the still-not-convinced about home baking and the Bake’Sheet monologues; Meringue is just two ingredients; egg white and sugar; in a 1:2 ratio, that you bate until white glossy and lickable (although I wouldn’t.) And par for the baking bit, 120° for 120 minutes.

The oven is never too hot for smallies, and you can stuff it, paste it, fill it, or crumble it with anything you like.

Speaking of crumbling – Eton Mess is my new name for Brexit.

Onto the technical.  Ah so what; posh fancy pants trifle.  But Prue’s receipe does break down into nice elements, like that Streusel is something you might want to keep for that whenever occasion we keep promising ourselves with.

The Bombe Showstopper has been dabbled with before in the tent, and like the Signature, this can be dolled up or down, depending on the occasion or your mood.  Skill level or ingredients don’t really control the effort or the outcome.

All in all, it was a good week in the tent because all the challenges can be attempted by all and any level of home baker; and better again, no kit is really really needed beyond a bowl, a mixer, a tray and an oven.

Unfortunately there isn’t much to offer this week by way of recipes; but given the challenges – Meringue, Trifle and a cold Dessert Bombe, I don’t think it would stop anyone from giving a Meringue Cake a lash while Lorenzo passes over.

Next week is another original; Festivals, so I suppose anything can happen inside a tent at a festival.

So ‘till then; BAKE!

14 thoughts on “Three Stephs To Oven”