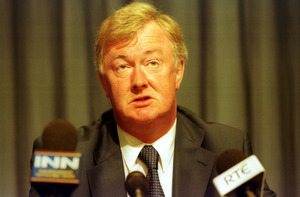 “The ideal way to meet this requirement [accommodating asylum applicants], obviously is by providing permanently-built accommodation and this is what the government plans to do.” 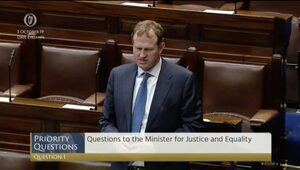 “What is the Government’s plan to provide further accommodation for the increasing number of people coming and seeking asylum? We have obviously had difficulties in establishing direct provision centres as we saw in Oughterard this week.

“We need to be careful. We have generally dealt well with the issue of immigration. It is apparent that some people from outside the country are opportunistically going to places such as Oughterard for the purposes of drumming up a racist agenda.

“We need to be careful that we do not allow their populist and racist appeal to spread in the country. One way to ensure that does not happen is by the Government having a clear plan in place to ensure people seeking asylum are accommodated in the future.”

Fianna Fáil’s justice spokesman Jim O’Callaghan (above) in the Dáil this morning on the recent withdrawal of a tender to provide a Direct Provision centre at a hotel in Oughterard, County Galway.

The Spirit Of Bertie Lives On