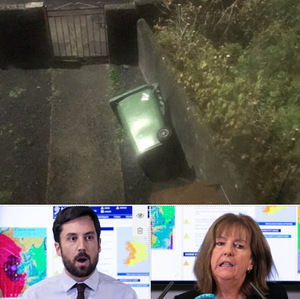 Dr Gavin Jennings: “The country seems to have survived?”

Keith Leonard: “Absolutely. And I think, Gavin, maybe there’s kind of two factors that play into that. The first is that the storm has appeared to have stalled slightly before it made landfall last night which took some of the energy out of the actual storm as it tracked down through the country.

“I suppose the second point to make is, I think, that the public advice and the safety advice that was given out yesterday and the day before was very well heeded by people and communities and people looked after each other very well during this. Which I think has been a huge positive influence on the outcome.”

Leonard: “I think we’re seeing the worst, the peaks of the winds have gone through. We still have some yellow warnings in effect and, as you’ve heard already from your previous reporters, we have some serious issues in Donegal town. There may be other issues of flooding throughout Donegal which seems, there seems to be a lot of rainfall has fallen there. So probably, as well, we’ve reports now of maybe 7,500 people without power.

“I think Longford, and Ballymahon, have experienced some wind. So it’ll probably be another few hours before the full effect of this storm has blown through.”

Jennings: “You’re due to meet later today, is that right?”

Jennings: “Is it necessary now?”

Leonard: “I think it is. As I say, we have a recovery situation in Donegal which we’ll have to look into and find what support we can provide for Donegal and we also have to collate the information and obviously, as well, there’s always a lesson to identify, apiece, at the end of all of the national co-ordination effort so I think we will be meeting today. Yes we will be meeting.”

Jennings: “What lessons do you think we’ve learned so far?”

Leonard: “I suppose, we’ll have to reflect on that as we go through the meeting. But I think probably we want to work on how we refine and balance all these responses are how we balance the public safety message with making sure that society continues to function and operate as normally as possible.”

Jennings: “Did we overreact?”

Leonard: “I don’t think so. I think the information that we had from early on was that this was the most easterly, most category 5, hurricane. As it approached Ireland, the wind was, I think, in excess of 1,600 kilometres which is a huge Atlantic storm. And I think probably we were fortunate in the fact that it did stall over the north of the country before it came inland which helped to reduce some of the impact.”

Jennings: “Almost all climate experts and weather predictors would suggest that  we’re going to have a lot more storms like this?”

Leonard: “I’m not qualified to give, maybe, the climate analysis of this but I definitely think that local authorities who are the lead agencies for this are putting in an increasing amount of work, year on year, into how to respond to winter storms and to respond to severe weather in general.”

Jennings: “Keith Leonard, thank you very much for speaking to us…” 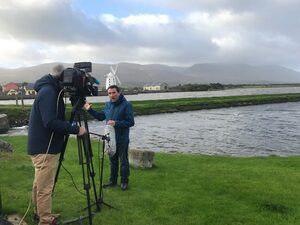 “I have a picture-postcard scene in front of me from my office this morning. I’m on Blennerville Bridge – the gateway to the Dingle Peninsula in West Kerry.

“And I am looking out at the windmill and it’s a rough scene here but certainly not exceptional by any manner of means.

“I have memories of crossing this bridge, walking to primary school when I was a child and the waves lapping over the bridge from one side to the other.

“I was here at high tide last night. The seas were rough but nothing like what I would have expected if the winds came at 130kph and, in fact, they didn’t.

“The highest wind speeds recorded in Kerry overnight were about half that – 67kph, gusts of 67kph at Met Éireann’s weather observatory in Valentia.”

“And so it was a quiet night…”

“For the most part it looks like Storm Lorenzo did not come anyplace near the height it was supposed to and predicted to on this part of North Mayo.”

“I think my reporting here this morning is similar to Ciaran there. In Galway, there have been no significant overnight developments either in the city or the county as we speak.”

“Last night’s high tide, at 9.24pm to be exact, it came and went without any major flooding incident. There was a pit overtopping at the prom in Salthill but nothing more really…”

“…I was the sole person to call Galway City’s [Council] number last night and earlier this morning so they had no calls. There was three to Galway County Council – all about fallen trees…” 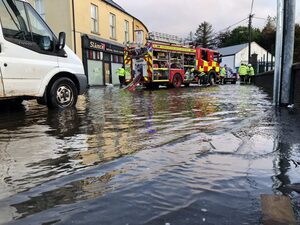 As well as flooding here at New Row in Donegal Town, there are reports of flooding at a number of housing estates in the area. Affecting as many as 40 homes pic.twitter.com/EU7XEVcq9k

Yesterday: It Is Upon Us

Back swimming in the sea! Regulars return to Blackrock Diving Tower in Salthill after heeding advice to stay away yesterday – apart from a few spotted in the water and dubbed ‘reckless’ by ⁦@GalwayCityCo⁩ ⁦@rtenews⁩ #lorenzo #salthill pic.twitter.com/DzmKlvcLop

It Is Upon Us

49 thoughts on “Lorenzo The Magnificent”