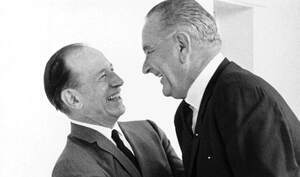 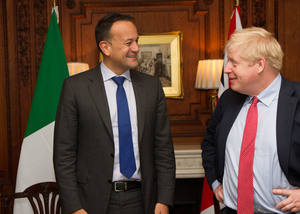 Visitors to the Lyndon Baines Johnson (LBJ) presidential library in Austin, Texas get to have their photos taken against a life size photo of the 6’ 4” LBJ leaning over them, appearing – figuratively – to bend them to his will. It is called “The Johnson Treatment”.

The original photo featured LBJ’s soon to be US Supreme Court justice Abe Fortas. It is just one of many photos of LBJ applying the eponymous “treatment”, once described by the pre-eminent Washington political columnist, Mary McGrory, as…

“an incredible, potent mixture of persuasion, badgering, flattery, threats, reminders of past favours and future advantages.”

In a fascinating interview at the John F Kennedy library, LBJ’s speechwriter (and husband of the great presidential historian Doris Kearns Goodwin), the late Richard Goodwin tells how LBJ worked his “treatment” on the segregationist governor of Alabama, George Wallace after the Selma marches. Wallace had come to the White House, Goodwin recounts:

“…Wallace comes in, and of course Wallace is about 5 feet 2 and Johnson is 6 feet 4, and so he’s got a big edge on him. And so, he says, “Governor, come in.” So then Johnson sits him down on the couch, where he sinks another three inches, and Johnson sits on the edge of a rocking chair, and leans over until he’s about one inch away from Wallace… he knew the beauty of invading someone’s space, and he did it.”

As Goodwin explains, LBJ set to work on getting Wallace to allow greater voter registration for Black Americans in his State. LBJ finished up saying:

“I don’t want you to think about 1964, I want you to think about 1984. We’ll be dead and gone then. Now you got a lot of poor people down in Alabama, a lot of ignorant people, a lot of folks that need different jobs. You could do a lot for them, George, what do you want after you go? Do you want a great big, marble monument that says, “George Wallace: He built?” Or do you want little piece of scrawny pine laying there across the soil that says, “George Wallace: He hated.”

LBJ gets up and leaves. Wallace is then given the statement Goodwin has prepared announcing what LBJ wants him to do. Wallace dutifully gives it to the press corps, later saying: “[If] He had me in there another hour, he [would have] had me coming out for civil rights.” He was incredibly overwhelming.

Though not remotely in the same league as LBJ in terms of ability, substance or persuasiveness, those who have met Boris Johnson remark on how effusively personable and charming he is face-to-face.

Like many modern politicians Boris Johnson hates to be hated. He desires to please and impress the person in front of him, be it by flattery or self-deprecation.

Where LBJ used his power as well as personal skills, traits and experiences to bend others to his will, Boris Johnson has just one tool: charm. A charm that the former editor of the Daily Telegraph Matthew d’Ancona, described as

“…a confection, a stage act with roots in his true nature but with many affectations and contrivances. He is, one should never forget, “Al” (for Alexander) to his loved ones. “Boris” is a persona: it is his populist Conservative version of Ziggy Stardust, The Rock or Borat. It is a means to an end – and a potent one.

One of those potent ends was getting into Number 10 and it has so far worked. A sad reflection on the state of UK politics today but, as the Guardian’s Simon Jenkins puts it, “charm is politics’ deadliest weapon”.

Boris’s charm has not only landed him the top job, it has obscured many to the reality that Johnson (in the words of Simon Jenkins):

“…emerges from his biographical record as incompetent, lazy, dissolute and a liar, yet the public’s response is that he is “our kind of liar”.

While there are rumours about what Boris said to Leo when they met alone in Cheshire last Thursday, including tales of a one-page note produced from Boris’s inside jacket pocket that set out the British proposal, only two people know for sure.

That said, I do not think it is too unreasonable or far-fetched to imagine that the full 90 minutes was not taken up with the finer points of customs union systems or consent mechanisms.

While Leo Varadkar can claim a decent grasp of such detail, it is a boast the British Prime Minister cannot make. This is the same Boris Johnson, after all, who was caught bluffing dreadfully about trade tariffs on live TV by Andrew Neil.

It is therefore difficult not to suppose that those 90 minutes of private talks focussed less on specifics and more on the general politics of their two situations.

How could it not? Here were two politicians, leaders of centre right parties who have assisted each other in the past, each now facing an election. How could they not discuss and explore the politics of what they each face, especially when it is so intertwined and dependent on what happens with Brexit.

Though some Irish pundits were wary of Leo’s heading to the meeting, it was Johnson who had the most to lose. Boris Johnson went in on the backfoot, especially after the debacle of a “senior Downing Street source” (i.e. Dominic Cummings) briefing The Spectator that the UK government was ready to punish those EU countries who back an extension beyond October 31 and that the Taoiseach “doesn’t want to negotiate”.

Besides this briefing being politically illiterate (an extension beyond Oct 31 requires EU unanimity, so any threat to punish those who backed it means all 27) it also wrong-footed the British government’s own efforts, even if they are only about avoiding blame for a no-deal.

Johnson went into the Leo encounter with no choice other than turning the charm up to a spinal tapping 11. From Boris’s less nuanced perspective he would be sitting alone with the one man who held the key to unlocking his Brexit difficulty.

Johnson (wrongly) sees Irish support for the Backstop as the main obstacle to his securing a withdrawal agreement he can get through the House of Commons. Wrongly, because binning the Backstop is not in Ireland’s gift. The EU believes in the Backstop’s purpose, the avoidance of a border across Ireland, as much as we do.

The task Johnson set himself was enormous. Charm Leo to backing down on the Backstop. If he could do that then he could offer to help ease Leo’s political woes through the removal of the threat of a hard-crash-out-Brexit.

Leo arrived under no such pressure. Unlike Boris, who did not grasp that they could not simply talk the Backstop away, Leo absolutely knew they couldn’t. His mission was twofold. Deny the Brits any chance to blame him for refusing to talk and just listen to what Johnson’s officials had to say and appraise Brussels.

This Leo and his officials did. But he did just a little bit more. He came out looking and sounding way too happy. While their joint statement was broadly positive and talked of possible pathways, it was still bland. So, where did all the post meeting hype and press talk of significant movement from British side and changing the picture substantially come from?

Was it just Irish political optimism stemming from what the officials discussed or did the Boris attempt at his own Johnson treatment have some impact? Did Leo succumb, even briefly, to Johnson’s charm and blandishments?

Even if he did, there was never any risk of it turning into anything real, though his excess of positivity did briefly deflate the hopes of those in the UK wanting a second referendum, as well as grossly inflating the desires of those in Leinster House wanting a snap election.

But while charm may be a weapon, it is not a currency. Something confirmed by the briefings coming from Brussels last night and this morning.

The signals, so far, are that no significant progress has been made and that the Brits need to move further on Northern Ireland to secure a Withdrawal Agreement by week’s end. Johnson has backed himself into a corner from which charm alone cannot release him.

Derek Mooney is a communications and public affairs consultant. He previously served as a Ministerial Adviser to the Fianna Fáil-led government 2004 – 2010.  His column appears here every Monday. Follow Derek on Twitter: @dsmooney