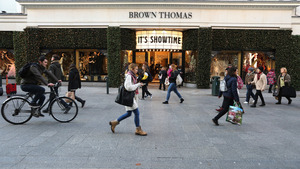 There are many necessary and progressive projects that could be implemented if there was enough money – public services, in-work supports, anti-poverty programmes, social and economic investment.

How would these be paid for?

There is a tendency to underplay the question, or imply that funding would come from simply ensuring the wealthy and corporate sectors pay their fair share.

Unfortunately, taxing the rich (whether households or corporations) will not be enough.

Let’s first look at how far behind we are other comparable small open economies in the EU. Among high-income countries, the Department of Finance suggests we should compare ourselves to Austria, Belgium, Denmark, Finland, Sweden and The Netherlands.

We find that Ireland lags well behind the other countries. In primary revenue (total revenue excluding interest payments), Ireland would have to increase public spending by €19.2 billion to reach the average of our peer group.

However, we don’t need to raise all that money as we need to spend less on pensions given our low elderly demographic. Nevertheless, when we exclude spending on public pensions, Ireland would still have to raise taxation by €11.5 billion.

However, this is probably an under-estimate as we have a much higher youth demographic requiring additional spending on education and family supports.

Would simply taxing wealth, high-incomes and the corporate sector raise €11.5 billion? No.

The arguments for a net assets tax, commonly known as a ‘wealth’ tax, are considerable. How much we would get from that source is debatable. The ESRI and NERI’s Dr. Tom McDonnell have done excellent work on the design of a net assets tax, different models and the resulting revenue.

The ESRI estimates that, in its most expansive form, a net assets tax would raise €3.8 billion. However, they rightly call this ‘highly unrealistic’:

‘ . . . the highly unrealistic scenario of taxing all positive wealth at 1%, this would raise an estimated €3,781 million and affect 86% of all households. To achieve this yield, however, would require taxing lots of people who have very little net wealth and possibly low incomes. In addition, applying a wealth tax to all households would present a very large administrative burden.’

More realistic scenarios suggest yields of between €300 and €600 million (where only 6 percent of households would be affected). One could drive revenue up to €2 billion, but that would involve taxing one-third of all households.

We need a net assets tax, but we also need to be realistic about the revenue it can raise within the parameters of social equity and economic efficiency.

One bright spot: there is a tendency to underestimate wealth and, thus, the potential tax revenue. But that still won’t get us to the levels of other comparable EU countries.

The scandalous stories of corporate tax avoidance suggest we should be capable of raising more revenue from this source. But given Ireland’s position in the global tax avoidance chain, we need to tread carefully given the potential of perverse outcomes.

This is one of the few benefits of being a tax haven (or ‘tax haven conduit’ or a ‘vital link in the global corporate tax avoidance chain’ – whatever). Money flows in and through Ireland and the state can wet its beak – taxing profits generated in other countries.

If Ireland were a normal economy (i.e. non-tax haven type jurisdiction – though The Netherlands has been known to play fast and loose) with a normal corporate tax base and tax regime, it would take in far less corporate tax revenue – about €3.6 billion less.

Calls for increasing taxation on the corporate sector need to take into account that the revenue we already raise is labelled ‘unsustainable’ – a nice way of saying that tax-avoiding multi-nationals could move their tax-avoiding profit flows away from Ireland.

Such calls also need to take into account the fact that flows into Ireland as part of a tax avoidance chain can easily be diverted elsewhere.

Calls need to take into account the impact that potential changes in international taxation (e.g. the OECD base-erosion proposals and the EU’s digital tax) will have on Irish taxation without any domestic policy change.

The fact is that international tax justice will likely lead to lower corporate tax revenue for Ireland.

And while Ireland has tax haven features, it is not by-and-large a letter-box tax haven (though someone might want to knock on a few doors in the IFSC to see if anyone answers).

Most multi-nationals here have substantial presence – in terms of employment, wages and economic activity. What would the combination of changing international tax rules and any domestic policy changes have on future foreign direct investment?

We have a tax-based FDI policy which is long past its sell-by-date. Do we have a new one ready to go? A progressive one that doesn’t rely on a lax regime with low tax rates?

Social Justice Ireland estimates that a minimum corporate tax rate would raise a substantial €1 billion. Even if that had no blow-back or downsides, this would still leave us far from the tax revenue raised in other countries.

What about increasing taxes on high income individuals?

While Irish marginal tax rates (the percentage of tax you pay on each additional Euro earned) are average, average tax rates under-perform – but not by significant amounts. So we could do a little better.

What about our friends in the top 1 percent? According to the Revenue Commissioners, the top 1 percent income earners – earning over €200,000 – pay an effective tax rate of 35 percent. If we were to increase that to 50 percent it would raise an additional €1.4 billion.

To do the same thing for the top two percent would yield an additional €2.3 billion. However, this would require steep increases in tax rates and could incentivise tax avoidance activities.

Sinn Fein proposed a more modest tax on higher incomes – essentially a new 45 percent tax rate on incomes above €140,000. This would raise €345 million. While this money would be welcome, it would not get us a whole lot closer to our peer group’s overall tax levels.

This also suggests that to raise the €2.3 billion on the top two percent would require an income tax rate of 70 percent for those on €150,000 and above; or a marginal tax rate of 81 percent. That is not terribly realistic.

* * *
This is not an argument against increasing taxes on those who can well afford it. Taxes on wealth – financial and real property – should be a no-brainer. They are efficient and progressive.

Nor is it an argument against domestic reforms of our corporate tax regime, even as we support international reforms.

The operations of a number of corporate tax expenditures (i.e. tax reliefs) are worthy of examination and reform: the knowledge box, entrepreneurial relief, bringing forward losses, enterprise incentive schemes, R&D tax credits. These could yield considerable resources which could be put toward better purposes.

And as for high-income individuals, it’s not the rate that counts but the base. We could lower marginal rates – especially on average income earners – while increasing yield by broadening the tax base. A stronger Universal Social Charge could achieve this for the simple reason that all income is subjected to the tax.

However, even these changes will not be sufficient to raise our revenue to the levels enjoyed in other countries. What will? I hope to take up this issue in a future post. But here’s a teaser: it’s not just about raising taxes.

It is about progressing the economy, especially the indigenous sector, into higher value-added activities while ensuring a more equitable share-out between labour and capital.

This is the hard work of transforming the productive base of the economy while privileging the producers (aka the workers). Increasing tax revenue doesn’t always have to mean raising taxes.

Michael Taft is a researcher for SIPTU and author of the political economy blog, Notes on the Front. His column appears here weekly..

7 thoughts on “Michael Taft: Taxing The Rich Is Not Enough”