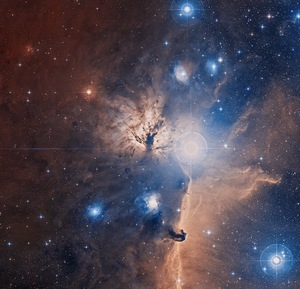 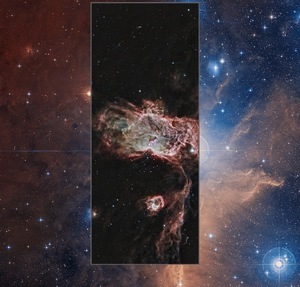 Behold: the dusty crowded star nurseries toward Orion’s Belt, 1400 light years away, as observed via X-ray data from the Chandra Observatory and infrared images (inset pic 2) from the Spitzer Space Telescope. To wit:

[the main image] reveals many stars of the recently formed, embedded cluster NGC 2024, ranging in age from 200,000 years to 1.5 million years young. The X-ray/infrared composite image overlay spans about 15 light-years across the Flame’s center. The X-ray/infrared data also indicate that the youngest stars are concentrated near the middle of the Flame Nebula cluster. That’s the opposite of the simplest models of star formation for the stellar nursery that predict star formation begins in the denser centre of a molecular cloud core. The result requires a more complex model; perhaps star formation continues longer in the center, or older stars are ejected from the centre due to subcluster mergers.

2 thoughts on “Inside The Flame Nebula”