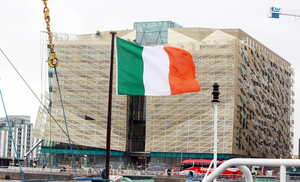 In last week’s article I argued that, while increasing taxation on the rich was desirable, it would not be enough to raise tax revenue to the level of our EU peer group.

But if we want to be an average tax and spend economy (by European terms) what does this mean?

How is the Irish tax structure different than our peer group?

There is one issue we can dispense with quickly: income tax.

For those countries with a comparable tax/social insurance structure (Finland, Belgium, Netherlands and Austria), Irish income tax revenue is in the middle, slightly above the average of the four countries.

In short, income taxes, which include USC, are not the cause of Ireland’s low-tax status. 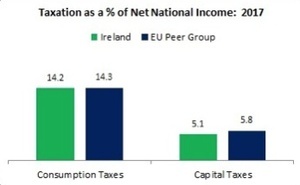 The other two main tax categories are consumption and household capital taxes. They are approximately average. It should be noted, however, that increasing capital taxes by 0.7 percentage points to reach the EU peer group average would raise €1.2 billion. Even fractional differences can be significant.

Last week we saw that corporate tax revenue was above the peer group average. Here we find that in the other main tax categories Ireland is average. Income, consumption, capital and corporate taxes: they make up over 85 percent in tax revenue.

So if we are average or even slightly above average in these categories, where do we fall down?

Social insurance (PRSI): Ireland is at the bottom of the league – not only in comparison with our peer group but with all EU countries. Only Malta and Denmark (which doesn’t have a social insurance system) are lower than us.

Total social contributions are less than half our peer group. Headline social contributions would have to rise by some €15 billion though when demographic spending is factored in, the gap shrinks somewhat. This is the driving reason behind Ireland lagging behind other countries.

With some exceptions, social contributions are paid into a social insurance or similar fund. They do not get paid into the Exchequer. These funds are not for financing education or police or public sector pay.

They specifically finance in-work benefits, including pensions. In some countries healthcare is wholly or partially funded out of social insurance funds. There are two parts to social contributions.

1) Employers’ social contributions are considered part of employees’ compensation. For example, if an employer pays a worker €20 per hour, they pay €2.15, or 10.75 percent, to the Social Insurance Fund (SIF).

The total compensation to the employee is €22.15. If the worker experiences an insurable contingency – temporary unemployment, sickness, pregnancy, occupational injury, etc. – they can access benefits from the SIF. That is why this part of social insurance is sometimes referred to as the Social Wage.

Increasing social contributions would be a huge challenge and constitute systemic reform. It would have to be phased in over the long-tem (e.g. 10 years) and would impact on all businesses and income groups.

There are two aspects to this.

Take the example of a one percentage point increase: employees would pay 0.5 percent, meaning that instead of getting a two percent wage increase, they would get 1.5 percent increase.

They would, however, gain through increases in benefits. This is how workers in many firms negotiate through collective bargaining: they reduce their pay demands in order to win a better pension plan or increased sick-pay. Thus, increasing the social wage is, or should be, part of a collective bargaining process.

Second, regarding increased contributions directly from workers and the self-employed, there is one advantage to social insurance.

Unlike general taxation which finances public services, uninsured social protection payments and investment (for many this is like money going into a black hole), I know where my social insurance contributions go.

They go to finance specific benefits related to work and my needs. In that respect, social insurance is more transparent.

Why are contributions so much higher in other countries?

Because their in-work benefits are much more generous. Take maternity benefit: in Ireland it is a flat-rate payment of €245 per week.

An average full-time employee will only receive a payment equivalent to 25 percent of their wage. In other EU countries, maternity benefit is paid out at 100 percent of the workers’ wage, which means households do not lose income during a high-cost period.

Temporary unemployment benefits, illness benefit, occupational injury benefit, old age pensions – all these are low flat-rated payments in Ireland. In other countries they are pay-related and, therefore, much higher.

And in some countries free healthcare is fully or partially paid through social contributions. That is what we might get if we paid European level of social insurance.

As stated in the previous post, we should still seek to increase revenue through taxes on wealth and capital, and high incomes.

But if we want to make a European-style breakthrough, increase benefits for workers and the self-employed, and drive living standards, it won’t be done through taxation. It will be done through social insurance.

Progressives should make every effort to direct the debate towards social insurance and the benefits it can provide society.

A good start would be a catchy slogan that upends the usual tax-and-spend image progressives have. How about: ‘a low-tax, high-insured economy’.