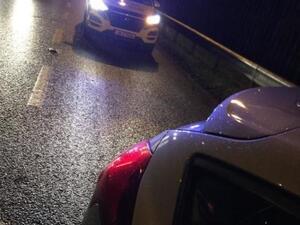 Naas gardai stopped this unaccompanied Learner driver travelling at a speed of 155km/hr in a 100km/hr zone on the N7 in Kill at the weekend.

According to the Naas Roads Policing Unit, the motorist was ‘driving on a wet greasy surface while wearing Flip Flops.’