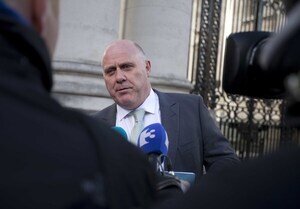 Having spent most of this century saying so little
the Collected Speeches of Noel Grealish TD
could be transcribed on the back of a parking ticket
a friendly Sergeant expunged from the system,
you’ve now appointed yourself leader
of the Blame-The-Black-Guy-Party –
so when one of your constituents finds
wife (or husband) impaled on their
personal trainer or a crisp bag blows
into their garden from next door’s bin,
they’ll know whose fault it is,
even though it isn’t the black dude doing either
their bank account or spouse,
and it definitely wasn’t him who blew that Tayto bag
into number fifty seven’s azaleas.

In light of this, scientists suggest
you be pureed into a paste
which, with water added,
could be served in tiny droplets
as a protein drink to malnourished baby hedgehogs;
or that society employ
a butcher’s apprentice to detach
your suddenly wagging tongue and hand it over
to a witchdoctor flown in
from the Congo Republic
by the Department of Social Protection
to do with as he sees fit;
or that we have a visiting Polish granny
dice you into a traditional Cracow stew
wasting not so much as an eyelash
and feed you to the pike in the Corrib
to see if they can stomach you.

Previously: “It’s Up To Him To Clarify His Intentions”