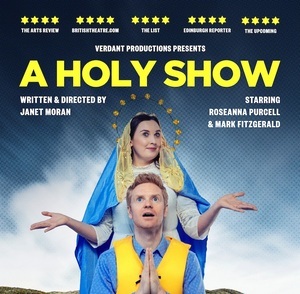 The hilarious hit comedy ‘A Holy Show’, presented by Verdant Productions, is going on tour across Ireland in January, February and March 2020 following on from the critical success of the Edinburgh Fringe and Dublin Fringe.

A nostalgic comedy based on a very Irish hijacking of the 1981 Aer Lingus plane by an ex-Trappist monk with a bottle of water as his weapon, the Pope as his nemesis, and a burning desire to know The Third Secret of Fatima.

From 23 January 2020 ‘A Holy Show’ is going on a full nationwide tour, with dates announced for Galway, Limerick, Laois, Wicklow, Cavan, Carlow, Cork, Longford, Clare, Belfast and Tipperary as well as a host of Dublin dates and two dates in Paris [details at link below]