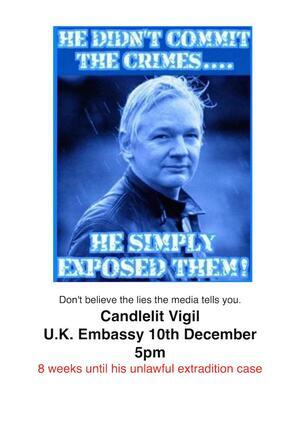 A candlelit vigil for Julian Assange.

Please join us on Human Rights Day to protest against the continued imprisonment of Julian Assange and the unlawful US Extradition Case against him.

On September 22 Julian Assange’s sentence for a bail violation ended, yet he was not released from Belmarsh Prison.

The UN Rapporteur on Torture, Nils Melzer has stated that Julian’s detention has no legal basis and on November 1 called on the British authorities to release Assange immediately out of serious concern for his life.

Insofar as Human Rights Day marks the fundamental human rights of all people, it also acknowledges the role of the UN in working to preserve and protect these universal rights.

The UN Working Group on Arbitrary Detention has twice called (Dec  42015 & Dec 21 2018) on the Government of the United Kingdom to restore Julian Assange’s right to personal liberty.

As their recommendations have so far been ignored it is worth reflecting on what this means for the credibility of the British State as a rule-of- law state and a member of the UN Human Rights Council.

By exposing the war crimes of the US and their NATO allies, and as founder of Wikileaks Julian Assange has proven himself an authentic and committed champion of human rights and independent media. It is now up to us to stand up for his human rights and freedom.

We will meet outside the British Embassy from 5pm for a 5.30pm start. Please bring a candle if you can.

5 thoughts on “Stand Up For Julian”