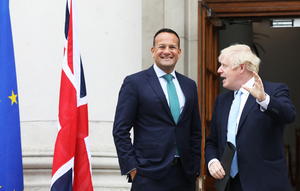 Addressing the 1992 US Republican convention, the former Nixon and Reagan speechwriter and perennially unsuccessful right-wing challenger for the presidential nomination, Pat Buchanan, described that year’s Democrat convention as “…the greatest single exhibition of cross-dressing in American political history.”

Buchanan’s problem with the 1992 Democrat convention, and its selection of newcomer Bill Clinton as nominee, was that it wrecked Republican plans to paint them as liberal and disconnected.

Instead of going to the radical left as Buchanan and President Bush (1) had wanted Clinton moved quickly to the centre and reached out to the working-class voters who had backed Reagan at the two earlier elections.

Desperate to save the Bush strategy, Buchanan was now trying to claim that the Democrats were still fundamentally liberal (a dirty word in American politics) and were only “dressed up as moderates and centrists” to fool the voters.

And not just in the past. Still writing and broadcasting, Buchanan continues to get it wrong in print and online.

Buchanan is a fan of Prime Minister Boris Johnson. He has likened BoJo to President Trump, so one wonders if Buchanan would level the same, crude, “cross dresser” accusation at Johnson’s Tory party for campaigning like an opposition, despite being in power for almost a decade.

Probably not. But he wouldn’t be the first man to attack others for practising what you preach.

Though I am appalled by the prospect of Johnson having his stubby little fingers on the levels of power for five years, part of me is still in awe of what he has done.

Not that Johnson can take all the credit. His victory is due as much to the unsuitability of Jeremy Corbyn to be prime minister as it is any great enthusiasm by the great British public to make Johnson PM.

A survey [by Opinium] of folks who voted Labour in 2017 but defected this time, found that 37% cited Corbyn’s leadership as the main reason for switching. 21% said they changed due to the Labour’s confused position on EU membership and only 6% said it was do with its economic policies.

This factor alone knocks on the head any idea that there was anything in the British campaigns that Irish parties should replicate here.

While Fine Gael and the Tories have some history of helping each other in the past, particularly on social media campaigning, there is not much in the Johnson playbook that Varadkar could try out here.

Unlike Johnson, who had only been prime minister for about 100 days when the election was triggered, Varadkar has spent two and half years as Taoiseach and 9 years, since March 2011, at the cabinet table.

Like it or not, he owns all the problems facing the country and – to judge from his somewhat tetchy and detached Saturday morning radio interview with Brendan O’Connor on RTE Radio One – this is something he is neither liking nor dealing with well.

While blaming health service problems on what Fianna Fáil did and did not do ten years ago may play well with the folks in Fine Gael as well as playing merry hell with my blood pressure, it can also been seen as a reminder that you’ve been powerless and ineffective for nine years.

The other Johnson trick that will not play here was his refusal to fully engage with either the opposition or with the media, particularly when it comes to debates and interviews.

Johnson’s Tories went into the campaign 10 points ahead of Corbyn. BoJo had nothing to fear from avoiding the tough scrutiny of Andrew Neil or others, apart from risking a chill on the kidneys hiding in a fridge to avoid the Good Morning Britain TV crew.

Varadkar is not in that position. He does not have a poll lead. Staying away from debates will not highlight his main rival’s weaknesses, if anything it will serve to emphasise his unwillingness to be challenged.

Varadkar’s team will instinctively strive to dictate how the media covers them, but it is not a one-way street. Their capacity to deliver that is more dictated by how the media, and the opposition parties, chose to respond.

OK, so those are the lessons we must ignore. But, what about the ones that should be learned?

There are three that immediately spring to mind.

The first is something I have talked about online here. We need to learn the lessons of online campaign abuse elsewhere and legislate now to ensure transparency in social media political advertising.

Fianna Fáil’s technology spokesperson James Lawless TD produced such a draft piece of legislation, the  Social Media (Transparency) Bill, over two years ago but this government has been stalling it since Dec 2017.

Second, if we really want to understand how to run a successful and engaged election campaign then do not look to the Tories, look up. Look to Glasgow and Edinburgh and take serious campaign notes from the SNP.

Sturgeon is easily the most effective political campaigner operating in any part of the neighbouring island. Her SNP started the night with 35 of the available 59 seats and finished up with 48.

All this apart from the fact that the SNP has been in office in Scotland for almost 12 years. That is how you successfully run as an incumbent with a record that you do not have to hide from.

Third, there are no such things as red green or blue walls, especially when the voters are volatile. These are blocks or groups of seats that a party traditional wins at an election.

At the 2016 US presidential election the Democrats thought their blue wall of democratic leaning districts across such old industrial states as Philadelphia, Ohio and Wisconsin would keep Trump out of the White House.

Jeremy Corbyn’s crew were convinced that a red wall clump of previously Labour supporting-constituencies across the North of England would stop, or at least reduce the chances of Johnson getting a majority.

Both were wrong. This is the simplest and most basic lesion of politics, take your voters for granted and they will have no compunction about switching sides.

The blue line of FG seats across the south and east of Dublin city are now far more vulnerable than they were. If the Taoiseach is hoping that traditional Fine Gael voters will stick with him no matter what, then he is in for a shock.

The same applies to Sinn Féin. Its view that once it takes a seat it never loses it. This was blown asunder by SDLP leader Colum Eastwood MP, after his stunning win in Derry. Just as with the Local Elections down here, Sinn Féin saw its vote halved in Derry.

While Johnson won the elections held in England and Wales quite easily, he lost the ones held in Northern Ireland and Scotland.

The consequences of this dichotomy will dominate Johnson’s five years in government and have an increasing significance and importance here.

24 thoughts on “Derek Mooney: UK Election Has Some Lessons For Us, But Most Must Be Ignored”