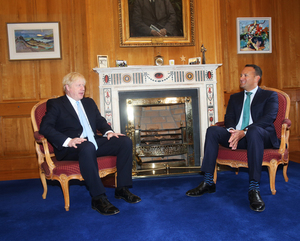 This may come as a shock to some, but it is entirely possible to want a united Ireland and not favour holding a unity poll within the next five years.

Indeed, I would suggest that it is axiomatic that wanting to see Ireland successfully reunited means having reservations about holding a referendum in the next five or even ten years.

The sensible position for anyone who thinks unity is more than just a political slogan is to not consider holding a unity poll until there is a more than a reasonable chance of it being passed.

Surely this is evident? Is this not a lesson we have taken from the whole Brexit vote fiasco?

This is not just a core principle of the Good Friday Agreement it is the fundamental basis of democratic process: every vote is equal.

An individual unionist’s determination to remain in the Union is as legitimate and valid as any republican’s desire to see a United Ireland. The idea of weighted majorities requiring a 55 or 60% threshold for change, as some have suggested, is not just denying parity of esteem it also denies parity of representation.

While making unity work in practical terms would doubtless require a greater public buy-in than just a bare 50% plus 1, the principle of one person, one vote – of equal value, cannot be up for grabs.

While we should avoid talk of holding unity polls now, the idea that we should stop talking about unity is a nonsense.

Not only is the suggestion wrong heading, it is simply an impossibility. For good or ill, Brexit has changed the relationships on and between these islands.

Brexit does not lead to unity, but by unilaterally removing the EU citizenship of people in Northern Ireland based on the will of a majority of English voters and against the freely expressed will of NI voters, (not to mention Scottish voters) the British government has undermined its own “precious” union and made discussion of unity not just possible, but sensible.

Almost every third level institution on this island now has a think-tank, institute or other policy group looking at how unity might work and operate. This is to be welcomed and will hopefully help inform calm and considered public debate over the coming years.

What is already clear is that there is not just one single model of unity, but a myriad of them – each with their own merits and downsides and each requiring various degrees of compromise from both sides.

This last point is crucial. While the unity debate will be a one-sided conversation among republicans, nationalists and non-aligned for the moment, the debate has to make itself both open and accommodating to Unionism.

Any viable model of unity cannot simply stem from what we might think unionists might want, but has be based on direct engagement with unionism, of all hues.

That is not something we can expect to see happen anytime soon. Before Unionism is ready to engage with us, it must first start to engage with itself. As the former UUP leader Mike Nesbitt has repeatedly observed, Brexit is unionism’s “biggest own goal” over the last century.

Unionism needs to process that reality, including seeing the ramifications of Brexit for unionism, particularly how the Boris Johnson form of Brexit – a Brexit made to suit England – plays out for it.

Not that we should expect, or want, to see this result in a defeatist unionism. As any negotiator will attest, the negotiated agreements that flourish best are those made between parties who have both confidence in their own positions and a real understanding of what the other side needs and can deliver.

But these debates among republicanism and unionism are not the only conversations on major political change happening on these islands, post Brexit.

The irony cannot be lost on constitutional republicanism here that Nicola Sturgeon’s Scottish Nationalist Party may well achieve its goal of full independence, within the EU, before we are ready to move to reunification.

Scottish nationalism is on the cusp of realising its dream without resorting to violence, terrorism or, as the 1916 proclamation puts it, dishonouring its cause with “inhumanity, or rapine”.

The SNP realised that a key first step to gaining Scottish independence was showing that Scotland could govern itself. It seems it has only now dawned on some folks here that this is also true for Northern Ireland. Having a stable Northern Ireland that works and can govern itself is a prerequisite for a successful unity campaign.

It is why the Good Friday Agreement is still a critical roadmap to how we proceed. A speedy return of the Agreement’s institutions: the NI Assembly and Executive (in the coming days) is vital for republicans who want to see unity.

All this talk of unity and reconciliation does seem very far off however as we watch the emerging fiasco over upcoming commemorations of events 100 years ago.

The announcement of State commemorations to acknowledge those who served in the Royal Irish Constabulary (RIC) and the Dublin Metropolitan Police (DMP) prior to independence has understandably raised concerns. The tragedy is that this was all avoidable.

In 2006, shortly after we marked the 90th anniversary of the 1916 Easter Rising, discussions started within government on how we should prepare for the centenary commemoration not just of 1916, but also of the whole decade of pivotal but complex events leading up to Independence from the lock out of 1913, through the War of Independence and beyond to the Civil War.

Those discussions, which including an all-party working group, focused less on the mechanics of how the ceremonies would be organised and more how we could address the complexities of commemorating these key events when people on this island have a common history but still do not have a common memory.

Many of the positive fruits of those discussions can be seen in Taoiseach Brian Cowen’s landmark May 2010 speech on marking this decade of commemorations. The text of speech is worth reading in full, however as it is no longer on the Dept of the Taoiseach’s website I cannot post a link here. You can however get a flavour of its contents here on the UCD website.

Notwithstanding the online expunging of this speech, I assumed the constructive and sensitive approach outlined by Brian Cowen was continuing to inform the current government’s attitude to these commemorations.

This seemed to be the case reading the 2018 report of the Expert Advisory Group on Commemorations, headed up by Dr Maurice Manning and Dr Martin Mansergh. In that report they say:

The aim of commemoration should be to broaden sympathies without having to abandon loyalties and, in particular, to recognise the value of ideals and sacrifices, including their cost… The goal of inclusiveness is best achieved, not by trying for an enforced common interest or universal participation, but by encouraging multiple and plural commemorations which remember the past while ensuring, as far as possible, that the commemoration does not re-ignite old tensions. [My emphasis]

Yet this is precisely what the Justice Minister has managed to achieve with his planned DMP/RIC event. The controversy comes not from the decision of senior public officials to refuse invitations, but rather in the way the government announced it.

Its own advisory committee proposed an inclusive event, namely: “a formal commemoration for all of those who lost their lives during the War of Independence be held in July 2021 [Again, my emphasis].

Those seeking this additional RIC and DMP event appear not to realise that the RIC, during the Irish War of Independence, included the Black and Tans, a force specially recruited to bolster an RIC that was losing members under pressure from the emerging Irish State.

The service and story of the RIC and DMP should not be air brushed from the events of the coming years, but there is a sensitivity around these State commemorations, not least those around the Civil War. T

he impression should not be given that these events can be revised to accommodate the outlook of whoever may be on the reviewing stand on the day.