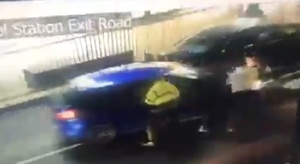 #Breaking Video shows a Garda been run over and dragged by car tonight in Dundrum.Thankfully the Garda is ok…. pic.twitter.com/xc4eEgxPt5

“At approximately 6.45pm on Sunday a male Garda (30s) was injured when he was struck by a car while on active patrol dealing with an incident at the Dundrum Town Centre.

“He was taken hospital for treatment and has since been discharged. His injuries are not life threatening. No arrests have been made to date and investigations are ongoing.

“It’s understood Gardaí and security staff were attempting to apprehend the occupant of a car when it fled from the scene at speed colliding with one of the Garda members.”

Footage shows as Garda, 30s, run over and dragged by vehicle before it flees scene in Dundrum, Dublin (The Irish Sun)