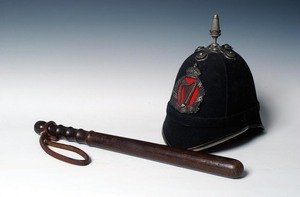 Well, what a mess. People used to say if you play with fire you get burned, which is what appears to have happened to Fine Gael with the RIC commemoration idea.

What were they thinking?

My own view is that they were creating a distraction, to cause a debate far removed from hospital waiting lists and homelessness. An attempt to create a shout-for-all safely parked in history. What a miscalculation.

“…it is disappointing to see some public representatives abandon the principles of mutual understanding and reconciliation in an effort to gain headlines.”

The Taoiseach was also “disappointed”; as was John Bruton, on the panel of the Claire Byrne show, who claimed that Fine Gael were taking a “mature” view of the events that transpired in what he described as our “two civil wars”.

He was corrected on this by historian Dr Mary McAuliffe who pointed out that Bruton’s first civil war was actually a War of Independence.

But gradually from the fog of obfuscation a pattern began to emerge of the whole thing being a stunt to allow Fine Gael claim a small mound of high moral ground in an argument of their own creation from where aspersions might be cast far and wide.

The debate could then be stoked by deliberate obtuseness, for no other reason it seems than to see the opposition tied up in knots faithfully trying to untangle the easy half-truths tossed so effortlessly into complex debates. The strategy back-fired spectacularly.

This kind of fake issue is typical of right-wing powers in recent times, where anything and everything is used, and often abused, to simply create division and obfuscation, while the perpetrators attempt to take advantage in the ensuing confusion. In this kind of political gamesmanship, nothing is sacred.

The two events are so entirely different that even the attempt to make out that they are one and the same is enough to short-circuit your thinking processes.

Naturally there were people who declined to attend a commemoration that seemed to be honouring the Black and Tans. But for a while this was just grist to the Fine Gael mill.

Though no one suggested that attendance at the commemoration was morally mandatory (or even compulsory) the “boycott” was soon well under way and eventually resulted in Fine Gael backing down, not with a cancellation, but with a deferment of the commemoration.

This came in the aftermath of a revelation by historian Diarmaid Ferriter that, contrary to Minister Flanagan’s assertions, a commemoration of the RIC had not been endorsed under the guidance of the Expert Advisory Group on Centenary Commemorations.

So, it seems to have been an entirely Fine Gael idea, plucked out of the air for perception advantages that might accrue to the party in light of a pending election.

But despite these setbacks Fine Gael stuck to their view that all opposition to the idea was morally questionable in its intent, which is essentially the moral view that they held from the beginning, a position that allowed them to declare morally superior “disappointment” with everyone.

Now with the deferment they were disappointed all over again at everyone else’s alleged moral shortcomings, and specifically so with members of Fianna Fail.

In psychology this is known as a Parent-Child transaction, with Fine Gael as the “parent” admonishing the wayward child, (Fianna Fail) but in such a mature way as to not express anger, but only “disappointment”.

We saw a similar angle worked in the Pat Kenny interview before Christmas where Leo Varadkar sought to characterise Fine Gael as the only common-sensical party in the country, surrounded by irrational ideologues who might capsize all the good work Fine Gael have done, as evidenced by the bodies piled up in the doorways of the republic’s city streets at night, and on the hospital trolleys of the state’s underfunded hospitals.

Here was the same idea now in another form, with Fine Gael being cast as the only “mature” party in the country surrounded by irrational hotheads lacking in the virtues of tolerance, compassion, reconciliation and maturity; qualities that Fine Gael claim to be so rich in.

What the entire affair appears to have demonstrated is that Fine Gael, like Boris Johnson and the Trump administration, are not at all shy about rearranging the furniture of history to accommodate present-day electoral requirements.

Which, when you think about it, is kind of disappointing.

The entire controversy seems to have been just another Fine Gael spin, where the object, as always, was to cast one sector against another and taint opposition to Fine Gael policy as intolerant in some way, shape or form; or irrationally driven by mindless ideology.

I guess the angle this time was to cast those opposed to this commemoration as opponents of law and order and all the Human virtues, while attempting to park public debate safely in the distant past.

But someone apparently forgot to drive a stake through the heart of the past and it rose up and declared itself severely displeased. The past, as it turned out, was not quite as distant as at first assumed.

However, the attitude underpinning the gambit, that the opposition is immature and irrational – in contrast to Fine Gael level-headedness and maturity – still persists, with Fine Gael remaining stubbornly “disappointed”, with a tincture of miff.

Its fine to be disappointed, many of us are, particularly since Fine Gael began to rule the roost; but the Fine Gael spin unit might be wise to remember that the last political party to imply that Irish people are too irrational, too irresponsible and too immature to govern themselves, was the British Tory party.