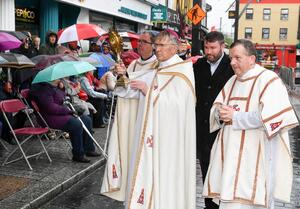 One of the more pleasurable aspects of being back in City Hall is being asked, occasionally, to deputise for the Lord Mayor. It’s always an honour to be asked.

The last time l had the opportunity was to celebrate the last day of Hanukkah while presiding at an art installation at Shalom Park, then inviting those attending, members of Cork’s Jewish community, back for refreshments.

At City Hall, as well as the lighting menorahs, two musicians armed with a fiddle and an accordion played Yiddish folk tunes.

The uber liberal in me fleetingly wondered if religion should be civicly endorsed like this. Of course it should, answering my own question. This is a celebration of community not doctrine.
Cork City Council organises similar events for other religious events like Eid and Diwali.

The Christian churches also get included. Our national holiday is a celebration of a Christian saint. In Cork members of the Council start the day by attending services at the Church of Ireland and Catholic cathedrals. Truth to tell I prefer the service at Saint Fin Barre’s Cathedral It has a less going though the motions feel.

Less acceptable has been the tradition of City Council participation in the annual Eucharistic Procession. Historically this was once a massively attended event with tens of thousands participating. Then it might have seemed politic for city councillors to take part.

These days the crowds are much reduced, as are the number of councillors who turn up. Time perhaps to delink the civic presence with this event.

Because the events of religious communities occur at different times of year, it is important that the State takes time to acknowledge these events as occasions of importance for the communities concerned. As celebrations of diversity they give hope that what is different can also be good.

It isn’t religious events that threaten secularism, the bigger threat is found with religious symbols, or more particularly their permanence.

Lighting menorahs in City Hall is a fleeting thing. Even cribs in public buildings over the Christmas period should cause no offence.

However our council chamber, like the chambers of many local authorities throughout Ireland, permanently displays a crucifix. While it is an important and evocative symbol of christendom, it should not be on permanent display in a civic building.

I have no intention of seeking its removal. There are many issues that are far more important to me. What I hope might happen is that other council members would begin to realise that this doesn’t fit and that we should end this practice.

It’s a fine line but it is one we are addressing better than we have been. More appropriate relations between faith and State are still to be determined. We need at least to believe they can be different.