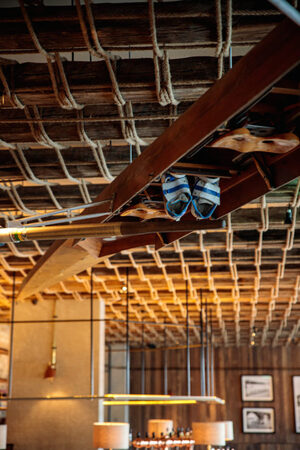 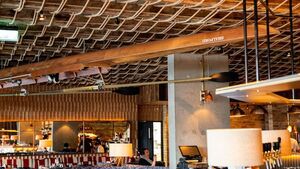 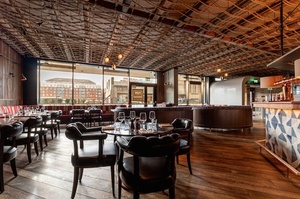 Enjoy the first restaurant review by The Fussy Eater – a new blog series from Ronan Leonard (aka the Tec Dr) – tucking into the the newly-opened Mackenzie’s in Grand Canal Dock, Dublin 2.

‘The restaurant scene in Dublin is being dominated by the Press Up Entertainment Group and the chances are that you will end up in one of their restaurants.

Having eaten in 7 of their restaurants, I was looking forward to visiting their latest restaurant, Mackenzie’s based near me in Hanover Quay.

As this is my first restaurant review, I was looking forward to seeing how MacKenzie’s compared to the other Press Up Entertainment Group restaurants that I have visited recently.

The restaurant that MacKenzie’s most compares with is Angelina’s, which has a similar décor and a woodfired oven, which is used to cook their fish, pizzas, steaks and some chicken dishes.

Recognising that the Grand Canal Docks area is popular with rowers, a wooden single sculling rowboat can be seen on the ceiling.

The first thing that hit me as I walked into the restaurant is how big it is, and I then noticed that I had come at an usually busy lunchtime.

My lunch companion who had arrived before me had been given the last 2 seat table, which had nice panoramic views of the Grand Canal riverside, and the unfortunate glare of the sun aimed at my face. This was the only low point of our visit. Our waitress apologised and mentioned that blinds would be installed in the restaurant soon.

The menu at Mackenzie’s is wide, varied focusing on modern American cuisine, and as there is an all-day menu means you won’t get any lunch specials.

The pizza’s and burgers looked tempting but in the end, we both chose the Barbecue St Louis Pork Ribs, with Spicy Apple Slaw, which was bizarrely listed under Entrees in the menu and cost €21.95.

As you can see being a fussy eater, my ribs did not come with the spicy apple slaw and both our meals came with fries. The one thing you can expect to get with pork ribs is a sticky experience as you try to stop some of the barbecue sauce dripping onto your clothes.

Thankfully the ribs had just the right amount of sweet barbecue sauce and the fries that came with them were nice, crunchy and not too thick.

Drinks are reasonably priced and my lunch colleague was surprised to get a glass of house white wine for €6 especially as most restaurants charge at least €7, soft drinks come in at €3, and beers start of at €4.80 for a non-alcohol- free beer right up to €8.00 for a Paulaner. My friend and I did not have any desserts which start at €7.95.

So, what’s my final verdict? I would definitely come here again and being a big pizza lover especially of Neapolitan ones, I would have to order one. The service was excellent and we were both well looked after, which is not always the case when a restaurant is very busy.

Mackenzie’s is a welcome addition to the Grand Canal Docks area, and with tech companies, law firms and the Bord Gais theatre nearby, getting customers won’t be a problem.’

20 thoughts on “Fill Your Boat Race”