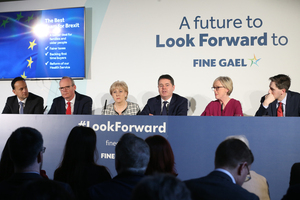 With eleven days of this general election campaign to go, the one clear message emerging from the national polls is that it is time to stick a fork in Fine Gael. It is not just done, it is done to a crisp. The only thing rare about Fine Gael in two weeks’ time will be the number of constituencies where it holds more than one seat.

“Hold on there, Mooney” I hear you shout, “…on what are you basing this prediction of doom? You’re the one who’s repeatedly told us that national newspaper polls are not good indicators of how seats will go.”

Yes, I reply. That is true – and extremely well put, I might add. I am also deeply moved that you have been paying such attention to my ramblings here… but, this prediction is not just based on the headline figures on party support, it is based on a series of important findings within those polls.

These findings come from separate polls, but they sit remarkably well together and underpin the trend that has been repeated in the four polls published over the past two weeks.

They are, listing them chronologically:

The figures on health were only marginally better for the outgoing party of government. There Fianna Fáil scored 24% (again) with Sinn Féin faring worse on 16% and Fine Gael again in third place with just 14%.

The only positive in this is the 2% bragging rights it gives Simon Harris over Eoghan Murphy, though I am not sure any of that will matter much when ministers come to wonder which of them will have the Portillo moment on the night of the count.

The breakdown for those in council rented was a mammoth 43% for Sinn Féin, 15% for independents, 14% for Labour, 11% for Fianna Fáil, 9% for the greens and a paltry 2% for Fine Gael. At 25% Fianna Fáil leads in terms of those with mortgages, compared with 19% each for Sinn Féin and Fine Gael.

These last two sets of data, from RedC and Ireland Thinks, along with the evenly split breakdown of the 75% wanting change via the Irish Times, may also help explain why Sinn Féin recovered so much ground in the past few weeks.

This, after all, was the organisation that lost almost half its councillors just eight months back and suffered some hefty losses to the SDLP at the Westminster elections, particularly in Derry.

As the Irish Times report, there is a sizeable chunk of voters who want more significant and radical change than appears to be coming right now from Fianna Fáil and they are ready and willing to listen to Sinn Féin especially when it is being explained by that nice Mr Doherty or that nice Mr Ó Broin.

Fianna Fáil says it is offering change, and it is – but, it has yet to get that message across to a wider audience, especially the many younger voters who are struggling to cope with the cost of living in today’s Ireland.

These are voters with aspirations.

They did everything they were asked to do. They went gone to college, they studied hard, they saw the global crash lower their expectations, yet they went out, got decent jobs with good wages.

Now they want to plan to settle down but find, despite those decent wages, soaring rents and lack of affordable housing leave them struggling to get on the first rung of the ladder, a ladder their parents had climbed when much younger than they are now.

At its heart, Fianna Fáil is about aspiration, both personal and national.

People want to hear its political leaders talk about how they will get the system to address their needs, not adjust their needs to fit the system.

There are moments, when I am listening to statements from some Fianna Fáil spokespeople, that I think I am back in a government department trying to decipher civil servant-ese. Fianna Fáil’s job is not to explain government’s problems to us, it is to put in place the programmes to enable it address them in government.

I usually write a rough draft of these pieces late on a Sunday night and revise them on Monday morning, while listening to Morning Ireland. Not today, though.

As you read this, I will be heading with many hundreds of others to the small parish church at Mullaghbrack, Armagh for the funeral of one of the greatest Irishmen of the past sixty years: Séamus Mallon.

While I met the man many times over the past two decades, I did not know him well enough to attempt to pay a personal tribute here.

What I can say is that Seamus’s courage in the face of both loyalist violence and provo vilification, as recently as May 2018 was a beacon to many, including a good friend of mine who offered this heartfelt tribute. He puts it better than I ever could: Goodbye and thank you Séamus. You saved lives and changed mine.

15 thoughts on “Derek Mooney: Stick A Fork In FG”