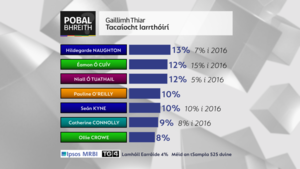 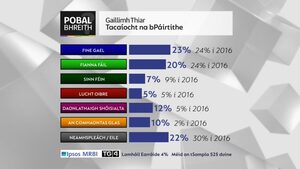 TG4 released results of a poll in the five-seat constituency Galway West which they say shows the Social Democrats and the Green Party are in contention to win seats.

The results of a TG4/Ipsos MRBI constituency poll carried out for ‘Vóta 2020’ programme shows a real dog-fight is in prospect in Galway West, with all five sitting TDs and as many as five other candidates all in contention to be elected.

The quota in Galway West is 17%, and although no one candidate has enough first preference votes to reach the quota according to the poll, the competition will be fierce for the five seats.

The TG4 Ipsos MRBI Galway West constituency poll was conducted among a sample of 525 adults aged 18 upwards. Interviewing took place on the 24th and 26th of January.

…When we look at party support on a combined candidate basis, both Fine Gael (with 23%) and Fianna Fáil (with 20%) exceed one quota, so it is very likely that each party will win at least one seat.

Fianna Fáil and Fine Gael have high profile candidates in Galway West and both are right up there on the evidence of this poll, with Éamon Ó Cuív (on 12%) and Minister of State Seán Kyne (on 10%), slightly down on 2016 but both within the margin of error of 4% on this particular poll.

Emphasising how competitive this election is however is the fact that neither of these two candidates tops this poll.

That achievement belongs to Fine Gael’s other sitting TD, Hildegarde Naughton, who at 13% has substantially improved on her general election figure in 2016.

The second Fianna Fáil candidate, Galway City Councillor Ollie Crowe, can also be satisfied with his score of 8% in this poll as he is a new candidate in 2020, and is building on expanding his solid support base in the city to the rest of the constituency.

Fianna Fáil and Fine Gael both fall well short of 2 quotas; FG on 23% and FF on 20%, however with both sitting FG TDs have performed well in this poll, both parties will feel they have a good chance of claiming a second seat in Galway West.

Many had tipped either Niall Ó Tuathail from the Social Democrats or Pauline O’Reilly the Green Party spokesperson for Children and Youth Affairs to poll well this time, so for both of them to be right in the mix (on 12% and 10% respectively) could be seen as a surprise, however both have been very active in building on solid foundations; Ó Tuathail from a good showing in the 2016 general election and O’Reilly from last year’s local elections.

Both look to have a real chance from the results of this poll, which in particular shows them proving very popular with younger voters.

Both sitting Independent TDs, Noel Grealish and Catherine Connolly have also shown well in this poll, polling well on 9% and 7% respectively.

Both are very experienced election campaigners with strong bases and have traditionally been beneficiaries of transfers.

In many ways the distribution of transfers looks crucial in determining the result of this election.

While Sinn Féin’s vote is down on 2016, they have recovered well after a poor local election last year and with a new candidate in Mairéad Farrell, they will also take positives that they can build on her poll score of 7% with plenty of time left in the campaign, and the party’s national support seemingly on the rise.

Previously: It’s Not The Economy

8 thoughts on “Meanwhile, In Galway West”