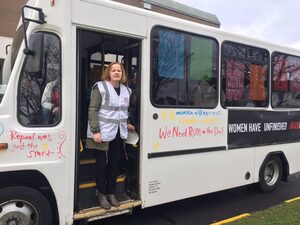 Solidarity-People Before Profit candidate Ruth Coppinger and her supporters are travelling around Dublin West on a bus today and tomorrow to highlight the message that women have “unfinished business”.

Repeal, was just the beginning. From the “epidemic of violence” against women and LGBTQ community, to victim blaming and shaming in the courts and media, to the housing, health and childcare crisis. Women are still bearing the brunt of trying to organise families and often in precarious and stressful situations.

Poll surges are indicating that Ruth’s seat is under threat. We can’t take any chances, we still have “Unfinished Business”.