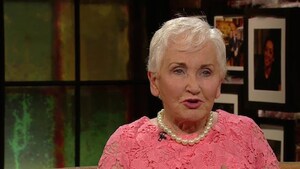 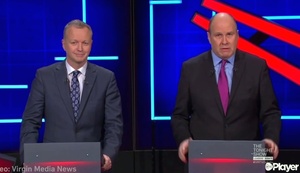 From top: Terry Prone; Ivan Yates (right) and Matt Cooper during the Leaders’ Debate on Virgin Media One last night

How did Ivan Yates develop his lovable telly persona?

Who on Earth could craft such a character?

‘On the day of the [General Election 2007] count, Sean O’Rourke went around the studio asking who would be the outstanding candidate of the election.

…When he went to Terry [Prone], she didn’t hesitate for a second.

“The outstanding winner of the election was Ivan Yates,” she said, “He came out of nowhere, or at least out of being half-remembered and, in a matter of weeks, he became a media star. He should abandon betting and move into media.”

…Terry had already turned me into a newspaper columnist whether I liked it or not. I had done a chapter on Celtic Bookmakers for a book KPMG had produced about entrepreneurs. The Communications Clinic does consultancy and training for KPMG and decided I should talk to Tim Vaughan, editor of the Irish Examiner, about a column. He said ‘Yes’.

In the beginning, I would send my first draft to Terry for her to sub-edit and tidy up but, after a few weeks, she told me I didn’t need her anymore.

…so when Terry ordered me into doing some [television and radio] run throughs [mock interviews], I said ‘Yes, Ma’am’.

…Terry pushed me relentlessly, tolerating no excuses…she had nothing to gain. I kept offering to pay her. She kept telling me to shut up and take notes.

She seemed in charge of basic skills while Anton Savage, managing director of their company, put a useful frame around the programme.

…Our ratings began to climb, I became surer of my radio persona, helped by a note I’d made when Anton had trained me.

‘Don’t set out to be likeable, you’ll be so bland and boring you’ll have nobody listening to you.’

That gave me courage when texts came in saying, ‘Ivan, I now know you are the greatest wanker of all time’.’

Ivan Yates in Full On by Ivan Yates

She had nothing to gain.

Earlier: “But, You’re Not Running In The Election?”

Anyone Know A Good PR?

16 thoughts on “Terry Made”