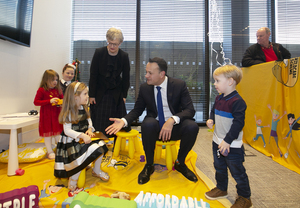 Tomorrow (Wednesday, February 5) there will be an unprecedented protest by childcare professionals in Dublin, organised by the Early Years Alliance.

With crèches closing down, workers from around the country will descend on the capital to protest not only their working conditions but the very system of childcare that exists today – a system that penalises workers, parents, providers and children.

Childcare in Ireland is a fragmented, exploited sector made up almost entirely of women. When other European countries were developing childcare and early years’ provision as a public service in order to promote women’s participation in the labour force, childcare was an afterthought among Irish policy-makers.

Employees were subjected to low pay and poor working conditions – precarious contracts, lack of in-work benefits, etc. They still are.

Over the last decade greater official attention has been paid to childcare and the Early Years Sector. Free early years education was established; programmes to professionalise the sector were rolled out; means-testing provided greater access for low-income households while subsidies to providers were increased.

However, these measures did not address the fundamental flaws in the childcare model. This has resulted in the highest childcare fees in the EU and some of the worst-paid employees in the economy.

Simply put, the current model of childcare is broken.

Broken and unsustainable: staff turnover rates in full-time childcare are over 40 percent. In a SIPTU/Big Start survey of early years’ professionals, two-thirds of employees stated they would not be working in the sector in five years’ time if things don’t change, while over 40 percent are actively seeking other work.

The providers’ organisation – Early Childhood Ireland – reports that over a third of providers are unable to recruit employees, with half unable to retain staff. If these trends persist, there will be severe labour shortages leading to fewer providers.

These problems are due to treating childcare as a ‘market’.

This model means that providers must raise at least as much revenue as they spend (like any other business). This places an impossible burden on providers. If they want to improve wages and working conditions (and, so, attract and retain staff), they will have to raise fees, making childcare even more unaffordable.

If, however, they want to reduce fees they will have to reduce expenditure and, since labour makes up over 70 percent of providers’ expenditure, this means squeezing labour. This would only exacerbate low pay and poor working conditions.

It is against this backdrop that the protest is taking place – a protest being driven by the childcare professionals themselves.

They have joined the SIPTU trade union in their thousands; they have collectively begun to put forward their own analysis. The key to unlocking the potential of the sector, to transforming it into a modern public service, is the workers themselves.

When the protest was first announced, some elements in the media and officialdom attempted to turn the story into how protesting employees were burdening parents by closing down childcare provision for a day.

However, even the most cursory review of what was happing on the ground showed substantial support for the one-day action from across the community.

The workers have made alliances with many providers – both in the community and private sectors.

And the parents themselves know there is a major problem; they are aware of workers’ poor working conditions, and are asking themselves why fees are so high. The interests of the childcare professionals, the providers and the parents coincide.

The workers, therefore, are protesting not only their own conditions; they are also mounting a fundamental challenge to the childcare system itself on behalf of all stakeholders.

Political parties have picked up on this and, for the most part, have made significant resource commitments to the sector. That is good. But the modernisation of the sector rests on three principles:

1) The state – through whatever mechanism – will have to subsidise the overwhelming proportion of the operating costs of providers.

2) This will have to be accompanied by a fees cap – once the subsidies, investment and provider sustainability are put in place

3) Wages will have to rise significantly, accompanied by an improvement in working conditions (e.g. permanent contracts, in-work benefits, etc.). Currently, over 60 percent of childcare professionals are paid below the Living Wage

That childcare is now becoming a major issue in this election is due to one development – the entry of childcare professionals themselves into the public debate.

Quite simply, workers have found their voice and now, speaking out on behalf of a new model of childcare, they are helping us to find our own voice. We can use that voice, in our hundreds of thousands, when we go to vote next Saturday.

5 thoughts on “Michael Taft: Finding Their Voice, Finding Ours”