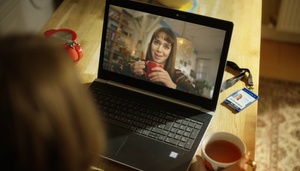 Barry’s Tea has released its first TV ad in over three years.

Directed by Nick Kelly (not our one), it features sisters who “despite their hectic lives” always find time to “catch up over a cup of Barry’s Tea via Skype”.

Shot in Dublin and Brooklyn, New York, ‘Sisters’ tells the true story of older sister, Nora, who has a job in Dublin and her younger sister, Gina, who’s chasing her dream as an actress in New York.

….The ad celebrates the fun and meaningful moments the sisters share, concluding in a heartwarming climax when Nora surprises her sister by showing up to the opening night of Gina’s play in Brooklyn.

Sisters’ features a contemporary version of the 80’s pop classic: I’m Gonna Be (500 Miles) by The Proclaimers by Irish performer Fya Fox…

23 thoughts on “Such Devoted Hipster Sisters”