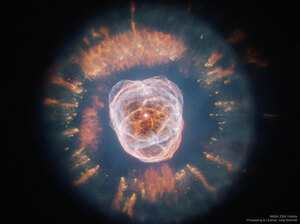 Behold: the double-shelled Eskimo Nebula (also known as the Clownface Nebula or Caldwell 39).

Some say it looks like a human head in a furry parka hood. But not astronomer William Herschel, who discovered it in 1787. For him, it was named NGC  2392 WH IV-45. To wit:

More recently, the Hubble Space Telescope imaged the nebula in visible light, while the nebula was also imaged in X-rays by the Chandra X-ray Observatory. The featured combined visible-X ray image, shows X-rays emitted by central hot gas in pink. The nebula displays gas clouds so complex they are not fully understood. NGC 2392 is a double-shelled planetary nebula, with the more distant gas having composed the outer layers of a Sun-like star only 10,000 years ago. The outer shell contains unusual light-year long orange filaments. The inner filaments visible are being ejected by strong wind of particles from the central star. The NGC 2392 Nebula spans about 1/3 of a light year and lies in our Milky Way Galaxy, about 3,000 light years distant, toward the constellation of the Twins (Gemini).