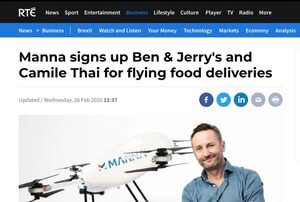 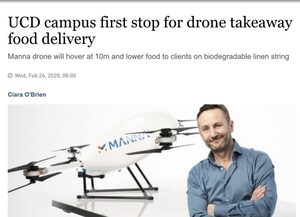 🍜🍨🍛 Manna is launching the world’s first aviation-grade ‘as-a-service’ drone delivery platform next month in Dublin with Just Eat. They promise to deliver food in under three minutes. | https://t.co/0LF15lWPO9 pic.twitter.com/6LusVblzCM

Next month a drone food delivery service will be launched at University College Dublin by Manna.

But not everyone is convinced…

“Fake news has reached our shores with startling revelation that our Saturday night takeaways are to be delivered by none other than a drone.

To wake up this morning and have this as a headline on not one but two of my newspapers of choice had me panicking that I’d been in some kind of induced coma for a month and it was in fact April 1st.

Not only was a company claiming that this would become a reality in less than 3 months, but they were also boasting multi million investment and partners who were to be joined to this nonsensical idea.

Even RTE got in on the act, putting together a report on how it was all going to happen. As if they were under some kind of spell, neither RTE nor the national newspapers paused for a minute to ask the obvious question: how the hell could this ever work.

Why hasn’t someone grabbed hold of this like Marian Finucane did with Minister Joe Jacob when he came on daytime radio to explain how we’d all be saved by iodine tablets in the event of a nuclear war. Get a minute-by-minute explanation of how it’s supposed to work in real-life.

It’s Friday night and rather than cook, you decide to order from your local takeaway. I say ‘you’ in the singular form because the weight of more than one meal would have the arse of the drone dragging along the South Circular Road.

We’re led to believe that the meal will be cooked, placed in a box and then stowed in the drone which is then flown out the back of the takeaway arriving with the customer in less than three minutes.

Amazing, considering a scud missile being sent one side of Dublin to the other would take longer. Not to mention missing its target.

The drone is now taking off from somewhere out the back of a takeaway which normally has difficulty storing pizza boxes, but now accommodates a take-off and landing site, as well as a new member of staff, the Pilot.

After taking off and clearing the wheelie bins and cardboard boxes stacked against the back wall we’re then led to believe having avoided trees, lamp posts, road signs, tower cranes and various scaffolding towers that litter the city,

it hovers outside your front door waiting for you to press the ‘accept’ button on the app alert you’ve just received and step outside in the pouring rain and wind with open arms to accept the tasty parcel being lowered by organic compostable string.

That’s all assuming that you have a front door unlike half the city who live in apartments or flat complexes.

This notion of a flying chicken curry is not reality.

Early last year Amazon managed to create headlines around the world with the news that they were soon to begin parcel deliveries by drone.

It hasn’t happened and it won’t.

The closest I’ve ever come to this was seeing my neighbour’s dog carrying The Herald back from the shop in his mouth. Not a headline anywhere.”

50 thoughts on “And Pigs Will Fly”