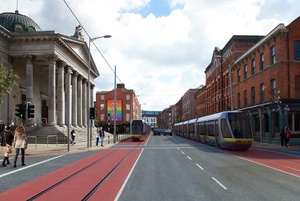 It was a press conference not a launch. Hosted by the National Transport Authority (working in ‘conjunction’ with Cork City and County Councils) it was to announce the final version of the Cork Metropolitan Area Transportation Study (CMATS)

This was following a period of public consultation, which in the typical style of Irish consultation, saw little change from the original draft despite considerable new input.

The document was prepared on behalf of the board of the NTA. Input was sought and given from officials working with the two Cork councils.

At stake is a twenty to thirty year transportation strategy for Cork. A strategy meant to have sustainability at it heart.

On the surface the presentation of the strategy, graphically and in its use of language, seems to tick all the right boxes.

However after a cursory reading it becomes obvious that no amount of right on terminology can hide such a lack of desire to achieve any real change.

CMATS is the third generation of similar studies designed to bring Cork’s transport infrastructure into a modern era.

I am old enough to know of each of the previous incarnations – the Land Use and Transportation Study (LUTS) from the 1970s and the Cork Area Strategic Plan (CASP) from the 1990s.

Each was structured along similar lines. Radical thoughts were written about trying to achieve a less car dependent society. The implementation of each plan was accompanied by a plethora of new road projects, with practically zero sustainable transport infrastructure being put in place.

So it is with CMATS. Some teases are placed to tantalise and suggest what could be done differently.

Light Rail is spoken about favourably. The caveat is that is to undergo a feasibility study (several have already been done) and would depend on ‘densification’.

Densification is the chicken and egg of urban planning. According to our stolid decision makers, infrastructure cannot be provided without a critical mass of population existing to justifying its use.

More likely is that proper sustainable development cannot occur without infrastructure being provided first, of a type that can help encourage such development.

Similar warm noises are being made about extending the suburban rail network in Cork. Being talked about are new rail stations for Blarney, Kilbarry and Tivoli.

This is something of a reheated proposal. All were suggested in the LUTS plan in 1975.

Most of what’s new in this plan centres around a Cork Bus Connects. There is something of a logic in this. Bus investment is more cost effective and easier to deliver. However in the context of this plan it is being overemphasised at the cost of a more balanced approach.

The most depressing aspect of this plan is an appalling lack of ambition.

The present travel mode split sees about two thirds of all journeys are made by private motor vehicles. One in ten journeys are by public transport. One in a hundred are bike journeys. The rest are walking journeys.

By 2040 this plan see about 10% less car journeys occurring mainly being transferred to greater levels of public transport, with a miniscule increase in cycling.

This would see Cork having a higher level of car usage than Dublin has now, whilst continuing to have a lower rate of cycling.

It takes a particular type of genius to suggest slowing down the speed of necessary change.

And don’t tell me it must be a Cork thing.