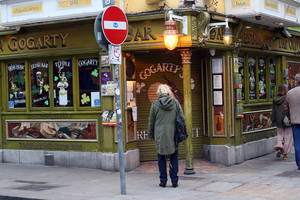 There is now a danger that the economy will suffer deep and long-lasting harm arising from the coronavirus.

Unfortunately (but inevitably), the virus has exposed major flaws in our income protection system, industrial institutions and public service capacity.

With an estimated 140,000 already laid off, this will quickly turn into a recession. Now is the time to design emergency policies based on key principles:

Where businesses are closed down due to Government instruction (pubs, restaurants, crèches), ensure they are in a position to recommence business once the emergency is over – and that workers have a place to go back to work

Negotiate emergency protocols across sectors, starting with those most vulnerable to a downturn, between representatives of employees, employers and the government

And, most of all, supply the cash that is needed – in economic terms this is first and foremost a liquidity crisis. If we don’t do this, we could quickly see this turning into an insolvency crisis with high levels of permanent business destruction.

Our social protection system has been exposed as ill-equipped to deal with the crisis. This was conceded early on by the Government when it reformed the Illness Benefit system, eliminating the six-day waiting period and increasing payments by €102 per week.

While many employees will have the protection of occupational sick-pay schemes which provide high levels of income protection, these will be mostly found in higher-income sectors such as financial and professional services, big tech, modern manufacturing and the public sector.

However, well over 50 percent of private sector workers may have no such protection – meaning that up to one million employees are totally reliant on the state’s Illness Benefit.

There is no sense in getting into comparisons with sick pay on the continent. Suffice it to say that all employees are protected by a combination of employers and the state/social insurance funds providing up to 100 percent of pay in the first few weeks.

We should have that same universal income-related protection for all employees but we don’t, and designing such a system would take months. The government acted in the only way they could regarding Illness Benefit.

We should do the same thing for Jobseekers Benefit and immediately increase it by €100 per week. Again, on the continent, unemployment benefit is income-related, something we should have put in place during the recovery.

Such payments protect living standards and prevent households falling into poverty and debt. The increase of €100 – while still not adequate – will at least help protect the incomes of the low-paid.

In addition, the Government could consider bringing in instructions that, for the duration of the emergency, there will be no evictions, foreclosures, utility shut-offs or discontinued health insurance for those on Illness and Jobseekers’ Benefit. This will give some sense of security to households who will be struggling to cope.

At the start of the crisis the Government announced a series of business supports. However, some of these were already in place, while others were designed to deal with a much different Brexit-related crisis (e.g. Enterprise Ireland’s Rescue and Restructuring Scheme).

We need strategic policies designed for, in the first instance, the sectors impacted by Government closure orders.

With no revenue coming in (though larger establishments may have reserves or insurance policies that cater to these type of emergencies through business interruption insurance), we have to at least ensure they can survive the emergency period and be in a position to re-open when some normalcy returns. Workers need a place to go back to work.

These businesses could be put under a special state-sponsored protection regime. While there would be a high up-front cost, in theory these subsidies would be repayable over a number of years; though in many cases businesses will go under permanently.

(b) Dealing with Reduced Demand

In other sectors which are struggling with reduced demand (such as non-supermarket and other food retail outlets), a range of measures could be introduced such as subsidised short-timing, postponement of tax payments (VAT, etc.), subsidies for rates, rents, etc.

These subsidies would be based on the particular sector’s capacity to absorb the damage incurred by the coronavirus-related downturn.

All this is dependent on whether the emergency is extended beyond the end of the month, but we should assume that it will be.

In Denmark, an agreement has been reached between representatives of employees, employers and the government whereby the state will pay employees in the private sector 75% of their salary if there is no guarantee they can work because of the coronavirus crisis, in exchange for employer commitment to keep employees in work and an employee exchange of working during some of their holiday leave.

This shows the power of collective and solidaristic bargaining, acting quickly, urgently and flexibly. For the most part we don’t have such institutions at the national or sector level. Therefore, the ability to address economic issues through stakeholder cooperation is limited.

We can’t rewrite industrial practice or create new industrial institutions in the short term. However, it is open to the Government to convene sectoral dialogue covering, in the first instance, the hardest-hit sectors.

This could mean sectoral dialogue in the restaurant, hotel, retail, and childcare sectors. And if any stakeholder doesn’t want to attend, then the dialogue and negotiated mandatory protocols will be conducted without them. No one should have the right to veto emergency action.

The coronavirus-related impact on the economy will trash all previous projections (I understand the Department of Finance was going to produce new projections this week; however, so fast is the emergency unfolding such projections will probably be out of date within a few days).

Let’s be clear about two things: first, this will be an expensive package upfront. However, much of this would be repaid to the state over a number of years when the economy recovers.

Further, if firms are permanently closed, if employees fall into poverty and debt, the recovery will take longer and will be even more expensive. This is not a stimulus programme. This is a defensive one.

Second, we have the resources. Prior to this emergency, the Government anticipated an accumulated surplus of €20 billion to €25 billion over the next five years. This will be reduced due to the economic downturn and the need to support health services.

However, the Government is working off a different, fiscally-healthier baseline than it did prior to the 2008 recession. In addition, it has €20 billion in cash balances and it can borrow at near 0 percent, meaning it can access free money.

As investors flee the stock exchanges for safe investments, these interest rates could fall well into negative numbers (which means that investors are paying us to buy our debt).

At the EU level, the Government should campaign to ensure that increased expenditure and reduced revenue owing to the coronavirus should be exempt from the fiscal rules; in particular, the force majeure clauses (disasters which government can’t control). The EU Commission has already provided increased flexibility and exemptions for Italy.

How much can we afford? As much as it takes. A package of €10 billion to deal with the crisis (not including the additional resources for the health services) would be a reasonable amount.

As stated above, much of this would be recouped from businesses when the economy recovers, and would save money if it helps a faster recovery.

Such a programme would pre-figure important post-emergency reforms: a national sick-pay scheme underpinned by an enhanced social protection system. This could lead to further reforms with pay-related benefits for a number of contingencies (unemployment, invalidity, parental leave) as applies on the continent.

We could also see new industrial relation institutions such as firm-level and sectoral collective bargaining to ensure greater participation and protection for all stakeholders.

Most of all, this could represent, as Bue Rübner Hansen puts it, ‘a step towards a new post-neoliberal economic paradigm’. This crisis shows that its resolution lies in the combined forces of a cooperative civil society and a public sector that privileges people’s health over profit.

These can be powerful forces in the transformation of economic and social relationships and can become the driving forces in overcoming climate chaos, blurring the distinction between the public and private (e.g. business supports are just forms of socialisation and a realisation of the limits of the market), reducing inequality of living standards through enhanced social protection supports and public services, and reducing inequality in the workplace through collective bargaining.

But that lies in the future. Today we face the challenges of defeating the virus, saving lives and protecting the economy. These are challenges that will require resources and solidarity.

Fortunately, we have both in healthy abundance.

Look For The Fine Print

Michael Taft: Give Everyone €75 A Week

11 thoughts on “Michael Taft: The Political Economy Of The Coronavirus”