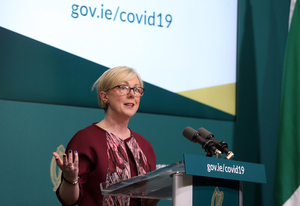 “If people have sensible proposals that are costed and thought through, that they believe are necessary and will make a difference, we want to hear about them.”

ICTU and SIPTU have done just that, proposing a wage compensation scheme whereby the Government would take over 75 percent of employee wages in sectors and companies that are facing closure, with the employer providing the remaining 25 percent.

This is based on the Danish initiative and is being rolled out in a number of EU countries. Even the UK is putting together a wage compensation scheme.

SIPTU has also called for those who have been laid off to also receive 75 percent of their wage at the time they lost their job, with employers being allowed to top up.

The Government has stated it is working on such a scheme and the Minister for Employment Affairs and Social Protection Regina Doherty  has promised to unveil their own programme in a matter of days.

Good. A number of commentators have lined up behind such wage compensation proposals. It has within a few days become the common sense of the economic emergency we’re facing.

So what is the cost of the benefit this income support will bring? Because let’s be clear, protecting people’s income is a benefit that will pay democratic dividends when the emergency subsides. It will protect households from falling into deprivation and debt and, so, will hasten the recovery.

Let’s start with a baseline of 100,000 employees. Further, let’s assume the average weekly earnings of €688 in the private sector for 2018 and add another 4.5 percent to bring it up to spring of this year. That comes to €719 weekly.

For every 100,000 unemployed, it will cost the state €59 million. Minister Doherty has acknowledged that as many as 400,000 could lose their jobs as a result of the pandemic.

Let’s assume that 300,000 will remain in their jobs as a result of this scheme. That’s 700,000 – who have lost their job or whose employers are at risk of closure; hopefully, a worst case scenario.

This raises the weekly cost to €377 million per week, or €1.6 billion per month. If this emergency runs four months, this scheme could cost up to €6.5 billion. That would appear to be a significant amount. But it isn’t.

First, the hospitality sector took the initial hit and average weekly earnings are much lower (€347 per week) so the cost of wage compensation would be lower. Many of the high-income sectors are unlikely to be hit as hard – financial sector, ICT and big tech, professional services and modern manufacturing.

Second, under a wage compensation scheme, workers’ income would still be taxed (just as Jobseekers’ and Illness Benefit are). So the net cost would be lower.

Third, we have to estimate the cost of unemployment benefit in the absence of this wage compensation scheme. For the 400,000 that may become unemployed, the state would still have to pay Jobseekers’ Benefit.

If we assume the current full rate of €203 per week (not all would get this after the first six weeks, while others with adult and child dependents would get more), the cost would be €1.4 billion.

Taking all this into account, the total cost could be in the area of €5 billion, and could be less depending on the composition of the unemployed and protected workers under the scheme.

We have cash balances of over €20 billion. We have a rainy day fund of €1.5 billion. We can borrow at nearly 0 percent. €5 billion represents only 2.5 percent of the national income (GNI*) that we generated last year.

National income is likely to fall, but even if it collapsed by 25 percent in nominal terms (the amount it fell during the bank recession), it would still only be a relatively small 3.3 percent. I don’t think I need to compare this cost with that of the bank creditors’ bail out.

Keeping businesses in business, supporting people’s incomes, avoiding debt and deprivation, putting the economy in a position to quickly recover after the pandemic emergency – the cost of a wage compensation scheme shouldn’t be seen as a cost. It is an investment, economically sound and socially equitable.

Let’s go for it. And start the conversation of how we put income protection on a permanent footing when the emergency passes.

Michael Taft: The Political Economy Of The Coronavirus