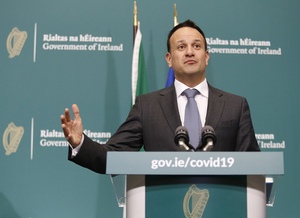 From top: Taoiseach Leo Varadkar claimed  people asked to be laid off so they could claim the €350 Covid-19 payment; Eamonn Kelly

Leo Varadkar told a press conference the other day that he had heard stories of people asking employers to lay them off to take advantage of the €350 coronavirus welfare payment.

He presented no evidence for this and simply used his platform as acting taoiseach to denigrate workers who, it was implied, were looking to turn the coronavirus crisis to their own financial advantage.

There were any number of anecdotes the acting taoiseach might have told to raise a giggle at people angling for an extra buck during a crisis.

Like retailers boosting prices on goods during the coronavirus crisis; or AIB deducting bank charges direct from the accounts of people who had just been laid off due to that crisis; or the plentiful anecdotes of private landlords over-charging tenants during the housing crisis in a private rental market made attractive by a neo-liberal government determined not to provide social housing. Ireland is rife with system-gamers exploiting crises, and we have the social casualties to prove it.

However, minister Varadkar chose to target low-paid workers for his derision, as is his form.

And the manner in which he told the anecdote, that slow grin, as if he had never heard of such cheek, revealed that same old ingrained prejudice against poor people that this privileged man has enforced time and again through social policy and sly insinuation.

The allegation is of course totally anecdotal. But Mr Varadkar, currently acting taoiseach, should really back this public statement up with names of employers and workers who, he claims, were attempting to game the system. In the interests of transparency.

He owes it to those workers who have been working around the clock providing basic services to all during the crisis, to at least identify those among their number who, he claims, were attempting to skive off work under false pretenses and claim the coronavirus welfare payment.

A payment, incidentally, which is striking in its generosity, with the minister declaring that the standard jobseeker’s allowance of €203 just isn’t enough to live on. That’s news.

That the payment is being divvied out by a politician who lost their seat in the last election, but is still somehow the minster for social protection, might cause a cynic to suspect a motive behind such generosity. An upcoming election might favour the politician behind such a generous gesture. A lost seat might be won back. Bought back, even.

There is a clue in Leo Varadkar’s statement as to the identity of the workers and employers at the root of the anecdote. It lies in his reference to 20 hours and an extra €11.

This can only be a  Community Employment (CE) scheme, or something similar, and the employer in question can only be a CE supervisor, who work closely with the DEASP.

So the anecdote most likely has its roots in a CE scheme, with a CE worker, who may or may not have been joking, putting this proposition to a CE supervisor who, apparently, reported it back to the DEASP, from where it was likely passed to Mr Varadkar’s PR representatives, who appear to have used the story in the hope of gaining some political capital by denigrating a target group; this time “lazy” low-paid workers on the make in a crisis.

In this attempt to gain political capital we see once again the familiar Varadkar ploy of targeting a weak group, incapable of political response, in an attempt to turn the anger of their peers upon the target group.

The bottom line being, as in the now infamous welfare cheats campaign, to create division and suspicion among those sections of society most adversely affected by austerity, low wages, premium accommodation costs, a financially crippled health service, and all the other familiar inequalities that are a consequence of the neo-liberal policies pursued by Fine Gael.

But Mr Varadkar lacks the courage of his convictions, holding back from going all the way with his scapegoating.

Rather than leaving those alleged system gamers in quiet community employment anonymity as the subjects of an amusing anecdote for comfortable socialites, he ought to, if he wants to be seen to be following through consistently on his charges, expose the individual culprits fully to public shaming. It’s clear that this is his intent in bringing up the subject. So let him go all the way.

Maybe set the culprits up on a scaffold in Smithfield and have over-worked staff of essential services fling rotten fruit at them. If you’re going to scapegoat, at least do it with a bit of pizzazz and give the public a show. All else is just unverifiable spin with a mean-minded twist and an intent to target the defenceless to gain political capital.

Such a mean-minded attack might even be construed as a deliberate and calculated act of relational aggression. An underhanded mode of behaviour that is not only beneath the office of taoiseach, but is beneath the standards of any decent person.

But we can take it by now that Fine Gael don’t just toss out ideas like this in an idle fashion. There is something behind it. Could it be an attempt to sow divisiveness between workers? Heroes vs lazybones? But why?

The clue might be found in Mr Varadkar’s own manifesto of 2017 when he was hungering after the Fine Gael leadership and the prize of becoming taoiseach by the back door.

In that manifesto was a proposal, based on a Tory template, to prevent workers of certain defined occupations from striking. Such occupations would first be defined as “essential services”, and the proposal would be to ban them from striking, because such strikes would be deemed too damaging to the public good.

Such a ban would of course curtail workers’ options in challenging disreputable employers seeking to exploit them.

Now the coronavirus restrictions have given Fine Gael and their right-wing associates an opportunity to clearly define “essential services”, and the payoff for the right might well be a ban on strikes by those workers they are currently characterising as “heroes”.

Beware the compliments of a flatterer, so said Machiavelli to the Prince.

Such a move would put essential workers at the mercy of government and employers in terms of pay and benefits, with no recourse to protest on their own behalf without breaking the law. To say no to employer exploitation would be a criminal act.

In the future, the only bonuses essential workers might be seeing may be the occasional public round of applause. Like artists and musicians, they may well find themselves expected to work for the experience and the “exposure”, and because they “love what they do”.

An argument was made in the Irish Times a week or so ago that Fine Gael ministers have governing skills that new ministers might not have, and since we are in the midst of a crisis, it might be best to leave Fine Gael personnel installed in their previous government positions, despite the election results.

That sounds reasonable enough given the circumstances. Though when you consider that the government in question is the same one that ran down the health service in a privatisation drive, among other neo-liberal strategies undermining social equality, the situation doesn’t seem quite as rosy.

A clear picture emerges of a fox smiling in a hen-house and saying, Sure, I’ll take care of everything. You relax. Don’t bother your pretty little heads about anything.

There was also the suspicion that the article in question was one of those fake articles from the Fine Gael spin unit, placed as a genuine article in a reputable newspaper, to help the cause of remaining in power even when some of their ministers have lost their seats.

Writing your own news and op-eds; leaving ministers in place to divvy out generous amounts of public funds; devising new strategies to divide and disempower workers, while cleverly attempting to suspend parliament under the guise of public health concerns.

Now that, is gaming the system.

16 thoughts on “Eamonn Kelly: Gaming the System (How The Pros Do It)”