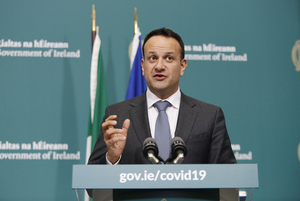 Varadkar has heard stories of people asking to be laid off so they could claim the €350 Covid_19 payment.

An Taoiseach @LeoVaradkar giving a brief statement this evening following the meeting of the Cabinet Subcommittee on Covid-19.#COVID19irelandhttps://t.co/VyVJSb1ZiH

During a press briefing in Government Buildings.

Taoiseach Leo Varadkar said he had “heard stories of people who had asked their employers to lay them off because they’d be better off” on the €350-per-week Covid-19 Pandemic Unemployment Payment than working 20 hours a week for €11 per hour.

“Do the maths, yourself,” he told journalists.

This is the full exchange Mr Varadkar had with a journalist about the matter.

Journalist: “Just in relation to…I think we saw 280,000 people or so applying for the PUP and having it accepted. I’ve seen some reports of people who perhaps, have got this payment, who didn’t have a job beforehand.

“I’ve even saw reports of somebody in Australia who’s received this payment. Are you are worried about people who are receiving this payment who haven’t, who aren’t entitled to it?”

Leo Varadkar: “Well, certainly, I certainly would be worried if anyone would receive the payment who’s not entitled to it and that would go for any payment that the Government gives.

“And also was easy to administer. So you’ll see, in contrast you’ll see, in other jurisdictions, in the UK for example, the money that self-employed are getting, they won’t get until June. Whereas self-employed people in Ireland are already in receipt of the payment if they need it.

“And not all of them but a lot of them. And again we want to make sure that companies were getting the money right away. And they are.

“But inevitably the perfect is the enemy of the good and what we did was good, I think, in terms of supporting people’s incomes and supporting business. It’s not perfect and there are going to be loads of anomalies.

“And I know one of the anomalies has arisen is that there are people who are working part-time, for example, who were earning less than €350 a week who lost their jobs and now, actually, might be slightly better off. And then there are other people who are getting the payment but are losing more, if you like.

“But it was always going to be the case that when we acted quickly, as we did, that anomalies would arise. And we’ll try and deal with them as we go along. But our main objective was to make sure that nobody was going to run out of cash.

“That people had a safely net for them. And in having a much generous safety net than is the case in other jurisdictions, again for example, north of the border, people are applying for Universal Credit and it’s about hundred pounds a week. Contrast that with €350 a week here. You know, we didn’t want to overcorrect the other way, where we’d be leaving people short. So there will be some people who’ll actually end up better off as a result.

“But they will be small in number and that was price worth paying to make sure that the vast majority of people had a decent proportion of their incomes protected.

“And, you know, I have heard stories of people who have asked their employers to lay them off because they’d be better off on the €350 payment than maybe working 20 hours a week for €11. You know, do the maths, yourself.

“And I would just say to anyone who is thinking of that, we are all in this together and nobody, in any walk of life, should seek to be better off, or seek to make profit out of this crisis.”

Previously: Welfare Cheats Cheat Us All on Broadsheet

35 thoughts on “Tested Negative And Petty”