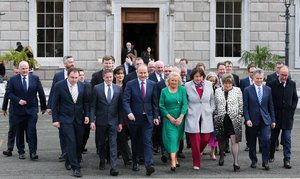 From top: Fianna Fail leader Micheal Martin and newly elected TDs on the first day of the 33rd Dáil on February 2; Derek Mooney

A few weeks ago I mentioned that the only place to have a rotating Prime Minister-ship is Israel. That was back in the mid 1980’s. It was part of national unity government agreement – a government that had the backing of 97 of the 120 Knesset members.

It looks like Israel is about to give the rotating premiership model another run with current PM Benjamin Netanyahu and rival Benny Gantz agreeing a three-year coalition deal that will see Netanyahu getting the first 18-month rotation and Gantz the second.

Interestingly, the two men who challenged each other in three parliamentary elections over 11 months, have also agreed to rotate the positions of foreign minister, energy minister and environmental protection minister after 18 months.

I know there are many here who would rather stick pins in their eyes than take heed what happens in Israel, but it does highlight some government formation issues which we should also consider.

The first is something I have raised here many times, specifically why are some political leaders so absolutely consumed with putting a 5-year government with a fixed 5-year programme in place right now?

Ignoring the fact that we have already used three months out of that 5-year timeframe, should we really be trying to set in stone the policies for a government post 2022?

I think not. Indeed, I believe we should be united, across political divides, in focusing first and foremost on getting through the next 18 months (to two years) as safely and securely as we can.

Once we are safely through and a vaccine is widely available then we can stop, take stock and have a general election informed by an evidence-based analysis of the problems then facing us.

The time for a comprehensive five-year plan, one that has been debated with the people, in an election, is when we have Coronavirus in the rear-view mirror. Frankly, having a 5-year recovery strategy for the period 2022-2027 onwards makes a lot more sense than having a two-and-a-half-year one for 2022-2025.

The other point is why is there so much focus on the position of Taoiseach?

This may seem counter-intuitive but just bear with me for a few minutes.

If the speculation is correct, then the Fine Gael and Fianna Fáil leaders have agreed to there being a beefed-up office of the Tánaiste. One with increased staff, and oversight.

I can see their logic.

Increasing the authority of Tánaiste potentially avoids the chances of any major shifts in government approach when they rotate at mid-term. Perhaps their outlook is that it should not matter greatly to government cohesion who goes first or second, as the alternate will just be down the corridor, in a slightly smaller suite of office, with the same access to papers and officials as the one in the Taoiseach’s chair.

Understandably, Micheál Martin’s staff are eager to get their man into the office as speedily as possible as they know that every two days that Leo Varadkar gets as Taoiseach now, means one day less for Micheál Martin in the role.

Unless I have missed out on something, there seems to be a general acceptance that Fine Gael will continue to hold the finance portfolio, albeit with a token re-establishment of a wholly separate Department of Public Expenditure.

The two departments, Finance and Public Expenditure, were split from each other in 2011 to accommodate the Labour party but have been under the aegis of one Minister since 2016.

While the Minister for Public Expenditure will be a major position in Cabinet, the Finance Minister will always have the upper hand. If you doubt that, ask any of the 26 Labour TDs who lost their seat in 2016.

In the Irish system of government money does not follow the decision; it is the other way around. Persuading just the Cabinet of the merits a policy change does not lead to that change being implemented. Real change only happens when the Department of Finance makes the money available. The Department of Finance effectively has a veto on all decisions. It is why the personality and mindset of the minister heading that department is critical.

Have one who wants a quiet life free of hard choices, one who sees themselves as the Department of Finance’s voice in the Cabinet, and nothing will change. They meet every plea from ministerial colleagues with the response: No, that is not going to happen, or the equally negative variation: do that from within your existing budget. In other words, slash an existing programme and use any money you save to fund it. Finance officials cherish these ministers.

The other, more astute type of Finance minister recognise their role as the Cabinet’s person ruling the department. Department chiefs may not like them, but they do respect them. The Department is not implacably opposed to change or reform, but it tests the mettle of those who drive it.

The only time we have had a Taoiseach and Finance Minister from different parties was in the 1994 – 1997 Rainbow. Fine Gael’s John Bruton was Taoiseach and Labour’s Ruairí Quinn was Finance Minister. The relationship between the two men was said to be good, better than the one between Quinn and his party leader, Tánaiste Dick Spring.

Micheál Martin may feel he can replicate the Bruton/Quinn act with Paschal Donohoe.

Perhaps he will, but it hard to find much evidence to back that up. It is no secret that Fianna Fáil had neither heads-up nor advance warning of last week’s dire and stark economic warnings by Donohoe as he published his department’s Stability Programme Update.

Even the infamous FF/FG Confidence and Supply agreement had a no surprises clause, though one more honoured in the breach than observance. But that was back when Martin’s party was only on the outside promising not to topple Fine Gael.

Now, with the two parties actively planning and preparing to go into government as “equals”, you’d expect the channels of communications to have opened up, not closed down.

It may just have been a one-off error of judgement by Fine Gael. One that they shall faithfully promise never to repeat, ever again. But it could just as easily be a sign of how fraught and difficult life in government buildings is going to be – and that’s before you toss the Greens, Independents (of various hues) into the mix.

Last night’s move by Fine Gael to downplay Martin’s big announcement to yesterday’s Sindo that he will scrap the pension age increase was the latest in a series of Fine Gael public rebuffs, all of which Martin has taken stoically.

It will be fascinating to see whether Martin’s TDs, Senators, Councillors and constituency activists can continue show the same stoicism after a few more weeks of this.

3 thoughts on “Derek Mooney: Who Takes The Finance Minister?”