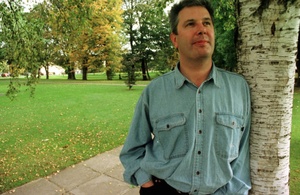 Gerry Ryan: The Legacy (RTÉ One). A Review

If you ever suspected the system might be rigged in favour of an elite, RTÉ certainly offered lots of food for thought for that idea in their tribute – to the late Gerry Ryan who died this week ten years ago.

Gerry Ryan hailed from the middle-class suburb of Clontarf. He attended Trinity and went into pirate radio and then RTÉ. His mother was from a theatrical family, this connection resulting in Eamonn Andrews being Gerry’s godfather.

Gerry went to school with one of Charlie Haughey’s sons and knew Haughey himself the way you’d know the dads of your pals.

Charlie Haughey by the way was the son-in-law of Sean Lemass, taoiseach at the time, who appointed Todd Andrews (no relation to Eamonn Andrews) to the chair of the RTÉ authority from where his first directive to the director general was to “fire that f**ker Byrne” from The Late Late Show.

What came through loud and clear from this potted history of one RTÉ life was the sheer tightly woven scale of the political connections operating in RTÉ since its inception, and the Fianna Fáil influence over the station, along with the huge monies that were bandied around to keep broadcasters of Ryan’s talent on the books.

Charlie Haughey was presented in the documentary as a kind of role model of style and influence who impressed the young Ryan; not as the taoiseach widely considered to have had a corrupting influence on the country’s political culture, the consequences of which we are still living with.

The man who was implicated in, for instance, the widespread Ansbacher tax evasion scam involving vast numbers of individuals from the church-going professional middle classes. The wily Charlie Haughey who, in the wake of the 2015 TV drama about his life was described in the Irish Times as:

“Charvet Charlie…his stately home, his befurred, entitled mistress, his grovelling Uriah Heep ministers, the phone-tapping, the tails, the threats, all remain too close, too familiar, too infuriating to be classified as fascinating or entertaining…”

Gerry Ryan too was presented in a kindly manner as a victim of over-eating and heavy drinking and lack of exercise rather than just another middle-class cocaine tooter contributing to the criminality that the eternally shocked middle-classes abhor when it suits them.

They conveniently make no connection between the boy that was dismembered several weeks back in some kind of twisted gangland retaliation, and the smug overpaid over-connected middle classes driving the whole nasty underground industry.

Though it would be tempting to conclude that Gerry Ryan was undone by the nepotism at the heart of RTÉ that saw a Todd Andrews heir take the top presenting job that Ryan felt entitled to, it is far more likely that the decision to award the show to someone other than Ryan was taken in the full knowledge of Ryan’s drug-taking.

However, on the tribute programme, innocence of this aspect of Ryan’s life was the clarion call. Like Manuel in Fawlty Towers, nobody knew anything.

So, in the narrative spun by the tribute, Gerry Ryan becomes a lonely victim of success; Charlie Haughey becomes urbane and sophisticated; Ryan’s cossetted middle-class and well-connected upbringing is portrayed as “ordinary”; the reek of nepotism at the heart of RTÉ is blithely ignored; and hardly anyone quite knows what cocaine is.

As a result, what the programme really showed, if inadvertently, was that the three elephants in the Irish living room are class, cronyism and accountability.

Where the only option for any form of social mobility is either through a direct connection to power, or to be endlessly “nice” and “agreeable”, remaining as deaf, dumb and blind to politics and difficult moral questions as the proverbial three monkeys.

In a sense the Gerry Ryan tribute fulfilled RTE’s commitment to public service broadcasting, albeit more by accident than by design, in that it lifted the lid on the nepotism, the high living, the comfortable connectedness and the big money at the heart of RTE, while also demonstrating the fine art of political spin as it is applied in the creation of anemic cultural narratives.

As a working-class person who has often felt unwelcome and out of place in Ireland’s largely middle-class arts community, (you can’t help but faux pas all over the place, and you are a non-starter in the sugary passive aggressive angles being worked to corner scarce funding opportunities) I long since suspected that the arts, like the other professions, including politics, were all essentially populated by people from the same postal addresses and colleges.

This programme more than confirmed that suspicion, while also shedding light on the arts sector’s largely silent contribution to political matters, along with that sector’s often obsequious behaviour towards government. The idea, it seems, is to “nice” your way into the funding.

This important work involves the maintenance of a hard, permanent smile, through thick and thin, until your rictus breaks your face in half when you realize your funding has been cut by the neo-liberal government you have been supporting with your silence.

As Barbara Ehrenreich showed in her excellent book “Bright-sided”, being endlessly agreeable and polite and calling it “positive”, in the hope of someday being favoured by those already installed in power, only makes a slave of you in the end.

You become so habituated to nodding your head in agreement that you lose the capacity to dissent; inadvertently contributing with your obsequiousness to the ongoing rot of cronyism at the heart of the culture you are, as an artist, purporting to mirror.

It’s not that RTÉ can’t interrogate a subject and spin a meaningful narrative. This is exactly what the Ryan tribute programme did.

The problem was it set out to protect its own class and interests; to exonerate its own tainted champions and to tidy up the neat middle-class world that it serves; re-painting all those pesky moral complications that were littering the place, in nice, fresh, bright, cheerful colours.

And that, more than anything, was a perfect illustration of how the Irish arts and cultural sector has sold out its own function in the interests of maintaining the political status quo.

Eamonn Kelly: Memo To The Mainstream