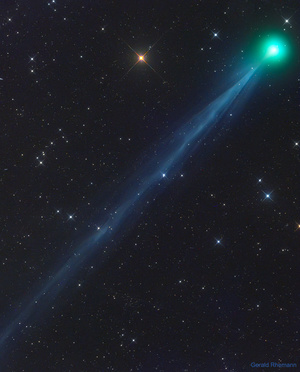 Behold: newly discovered comet C2020 F8 SWAN, just arrived from the outer solar system and developing a nice ion tail, having already passed inside the orbit path of the Earth. To wit:

…this outgassing interplanetary iceberg will pass its closest to the Earth on May 13, and closest to the Sun on May 27. The comet was first noticed in late March by an astronomy enthusiast looking through images taken by NASA’s Sun-orbiting SOHO spacecraft, and is named for this spacecraft’s Solar Wind Anisotropies (SWAN) camera. The featured image, taken from the dark skies in Namibia in mid-April, captured Comet SWAN‘s green-glowing coma and unexpectedly long, detailed, and blue ion-tail. Although the brightness of comets are notoriously hard to predict, some models have Comet SWAN becoming bright enough to see with the unaided eye during June.