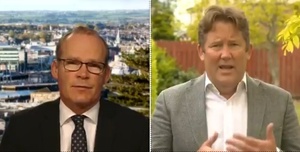 As I opened last week’s column talking about how virtual quizzes have helped make this lockdown easier to bear, it’s only fair that I give TV a bit of credit.

Not just Television in general, even though it has helped a lot. I am thinking of one new TV drama series in particular. You know it.

Whether you follow it in weekly instalments on RTÉ, or binge watch it online, it has garnered an enormous amount of attention, stretching well beyond its normal time slot. It has given radio phone-in shows across the country plenty to talk and argue about.

Some say it captures the beauty and brutality of courtship and rejection with compassion and feeling. They point to the how the slow, methodical progression of the will they, won’t they narrative hesitantly gives way to the uneasy tensions of the first fumblings of intimacy.

The on screen appearance of a few limp dicks has set folks on to social media to rant about a loss of values, nonetheless it has still been the landmark lock-down drama.

But enough about the government formation process, hasn’t Normal People been a great watch too?

Trust me, I would much prefer to be writing about Normal People than what I am about to deliver, but I am a political wonk and that means sticking with the stuff about which I know something.

Fianna Fáil colleagues will be relieved to know that this week’s piece will not be about the party’s trials and tribulations – well not directly, anyway.

After four or five weeks of shoehorning oblique “emperor’s new clothes” references into my weekly offerings, I am taking a rest and letting them off the hook… for now.

My plan, up to mid-way through Sunday afternoon, was to look at how Fine Gael was handling this government formation process.

While the plan hasn’t changed, the intemperate and petulant statement issued on Sunday by the Blueshirts… sorry… Fine Gael… altered the angle from which I will approach that analysis.

While the immediate sturm und drang thrown up by Fine Gael’s statement may abate when Micheál Martin and Leo Varadkar get to meet face-to-face today, it does highlight the absence of any trust between the two parties. Yet both leaders insist this faltering process can and must result in a government capable of lasting for four and half years?

So, how did this particular drama unfold and just how did it end up with Fine Gael saying the talks process is damaged?

It started, on the face of it, early on Saturday morning with a front page scoop by the Irish Times’ Fiach Kelly. He said that plans:

“…are being drafted by officials on the orders of Minister for Housing Eoghan Murphy on a contingency basis should the current negotiations to form a government fail”.

Note the bit in bold… on the orders of. Now, while I cannot speculate on where a highly respected political reporter like Fiach got this story, I am willing to bet that it didn’t come from Fianna Fáil.

It may have come from the department, it is generally accepted that senior officials do not leak, well, not unless there is a very real benefit to the department in them leaking… and I am not seeing that here.

It is not unreasonable to therefore deduce that it may have come from someone around Fine Gael, though there is no hard evidence to support that.

Not that the source is ultimately all that important, especially as the core of the story is true. Such a contingency is being considered, though probably not on the orders of the Minister.

So, now we have the lit fuse, step forward Fianna Fáil who respond by engaging in a bit of tit-for-tat. They see Fine Gael as goading them with a “we can have an election if you folks fail to agree with us” message via the Irish Times and strike back with a tweet from Barry Cowen.

This is followed up on by a few other Fianna Fáil TDs and Senators. So far, so not very unusual. Not especially edifying, but process damaging? No.

Indeed, it is worth recalling that politicos and journos have been talking about a second election for weeks. I wrote about it here at the beginning of April, and suggested that far back that such speculation was possibly fuelled by informed discussions with sources not far removed from the Fine Gael leadership.

Back to the sequence of events. Things go quiet until yesterday at noon, when Fine Gael’s Deputy Leader, Simon Coveney is asked about the matter on RTE’s The Week In Politics.

Rather than responding to Fianna Fáil’s response and ramping up tensions, Coveney does what grown-ups are expected to do and moves swiftly to de-escalate the situation.

He tells Aine Lawlor that he had spoken to his Fianna Fáil counterpart, Dara Calleary and assured him that Fine Gael was not planning for a snap general election.

Fianna Fáil’s representative on the show Darragh O’Brien TD, not known for being one of politics’ great softies, sees Coveney being conciliatory and reciprocates by putting down his political cudgel.

So, as folks sat down to have their Sunday lunch it looked like the fuse was extinguished and the crisis averted. Just then Fine Gael churned out his statement. But to what precisely was the statement a response?

Darragh O’Brien had not cranked things up after Coveney’s mollification, quite the opposite, in fact. Could the official Fine Gael statement be a response – even a rebuff – to Coveney?

There are odd, even eerie, echoes in this micro-crisis to the November 2017 real crisis when Varadkar risked the fate of his government to save France Fitzgerald.

I wrote about it here at the time. Re-reading that piece shows how the Fine Gael playbook has hardly changed. Constant brinksmanship. Deliberate and contradictory mixed messaging.

Minister after Minister sent out to accuse Fianna Fáil of wanting an election while the Taoiseach tells RTE’s Six One:

“I don’t believe Micheál Martin wants one [an election] either, by the way…”

Varadkar got his blame game wrong in 2017, but are his team of advisers convinced that his situation is so bolstered by the pandemic crisis, or that Martin’s is so undermined by falling poll numbers, that the tactics that failed then will work now?

Even if they were to work, what do they expect to happen?

Do they think Martin will dispatch his two loyal lieutenants to appease faux Fine Gael outrage? If he does that, Martin is toast – but even if he were to survive, how does that move anything forward?

While Martin and Varadkar may emerge from today’s discussion with socially distanced handshakes, the illusion of understanding and even hints of contrition, the trust that wasn’t there on Saturday morning, still won’t be there tomorrow.

The damage to the process didn’t suddenly appear on Saturday, it has been there from the start, and long before that, if the truth is told. The absence of any trust is one of the few constants in this constantly astonishing process.

People do not have to like each other for trust to develop, but they must feel that they are in something together for mutual benefit and with mutual risk.

Neither is evident here. Why would it be when one party thinks it has loads of options, though probably not many as it hopes, and the other party is being told from the top down that there is no alternative.

Who in their right mind would think this is a recipe for success? Not normal people, that’s for sure