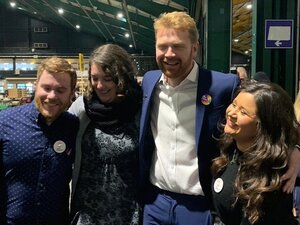 From top: Gary Gannon (top second right) on the night of his election victory and Christopher O’Sullivan (above centre) on his first day at the Dáil

Fianna Fáil’s Christopher O’Sullivan and Gary Gannon of the Social Democrats have both given taxpayer-funded jobs to siblings.

Cork South-West TD Mr O’Sullivan has two sisters working for him and Mr Gannon, a TD for Dublin Central, has employed his younger brother.

Why I Am Staying

39 thoughts on “Yeah, That’s My Brother”