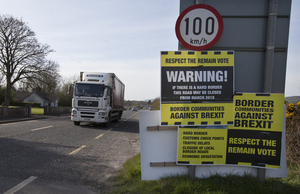 The {British] government has confirmed there will be new checks on some goods entering Northern Ireland from the rest of the UK as part of the Brexit deal.

It will expand infrastructure at Northern Ireland’s ports to carry out checks on animals and food products.

The details are contained in UK proposals for implementing the NI part of the Brexit deal.

Northern Ireland will continue to follow some EU rules on agricultural and manufactured goods.

According to an eagerly awaited paper on how the UK will implement the Protocol, seen by RTÉ News, London has also said there will be no tariffs on any goods moving between Great Britain and Northern Ireland, so long as they remain in the UK’s customs territory.

The paper also says there will be no new customs infrastructure in Northern Ireland.

The document is certain to prompt further disagreements between the EU and UK over the requirements of the Protocol.

The Irish Protocol is not “codified” as a permanent solution, the paper says.

“It is designed to solve a particular set of problems and it can only do this in practice as long as it has the consent of the people of Northern Ireland,” it says.

4 thoughts on “‘New Checks On Some Goods’”