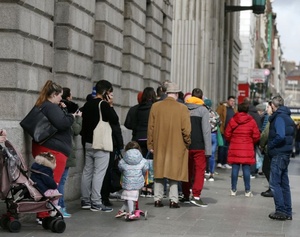 Ever since Leo Varadkar inadvertently revealed on Newstalk Breakfast last week  that Fine Gael’s job creation claims included almost a quarter of a million Irish people working for wages below the CSO poverty threshold of €235, there has been almost total silence in the Irish media.

Anne Rabbitte of Fianna Fáil burst out on radio and seemed outraged that people were “getting a hell of a lot more than they should be getting”.

Brenda Power bellowed from her Sunday Times pulpit and declared that the people receiving the Covid-19 payment, the same people working for wages below the poverty line, were “scammers”.

The interesting aspect of what has emerged is less to do with pay rates, and more to do with the attitude of these people towards those they clearly consider undeserving of the same benefits and privileges that they enjoy.

This attitude was apparent too a few weeks back when Leo Varadkar invited laughter and incredulity when he told that anecdote about “hearing” about people on part time schemes asking to be let go to avail of the Covid-19 payment.

All of this belittling of these underpaid workers is most likely a deliberate grooming for a fresh round of austerity measures.

Gene Kerrigan, writing in the Sunday Independent (May 24), noticed the general silence of the mainstream media on the issue, and noted that the Irish Times, rather than covering the mysterious case of the quarter of a million Irish workers living below the poverty line, chose instead to report on a story about President Higgins, who had given a short interview to an Italian Communist newsletter interested in the views of a socialist president in a European country.

On a normal day the story wouldn’t make page 7. During that interview, concerning the aftermath of the coronavirus lockdown, Michael D opined that a return to austerity would not be a good thing.

The Irish Times, as Kerrigan showed, drummed this non-story up into a kind of red scare story, insinuating that the president was a troublesome communist who had “raised eyebrows” in government circles with his comments.

But the Irish Times failed to mention anything about the 240,000 people working below the poverty line, who are counted by Fine Gael’s statisticians as job creation successes.

Who are these impoverished workers? Why is the Irish media not interested? Is it the same attitude that saw them described elsewhere as scammers? Why are these people not important enough to mention?

Many of them are carers working full time for €203 per week, a full €32 below the CSO poverty threshold.

The Community Employment schemes employ the most people, 21,500 in 900 schemes across the country. Ostensibly a re-training and work experience programme, the work generally involves caring, maintenance of sports facilities, upkeep of churches, and various arts and cultural initiatives.

The wages for CE are €20 extra on top of the €203 jobseekers’ allowance, coming to around €12 below the CSO poverty line of €235. CE participants used to receive an extra €50, but this was cut during austerity and never restored.

Participants on CE work 20 hours a week, but in practise it is more usual that they are expected to be “flexible” and on call for the entire week to facilitate the needs of the sponsor.

In 2017, following an embarrassing report that showed only a 3-7% success rate for the JobPath employment activation programme, it was decided that CE schemes would be re-classified as “real” jobs, but only for the purposes of live register and job creation statistics, not for minimum wage obligations.

The confidential contract that exists between the DEASP and the private activation companies, Seetec/Turas Nua, ensures a payment in increments tied to duration of employment, with 12 months continuous employment qualifying for a payment of €3,718 per “client” under a “sustained” employment agreement.

It is believed that the same contract also involved some kind of quota system where Seetec/Turas Nua would be promised x-amount of “clients” per year, each “client” being worth initially €311 on registration, with the potential for further payments, on a sliding scale, if placed in employment during the term of the “client’s” agreement with Seetec/Turas Nua.

It is thought that there simply weren’t enough unemployed people to meet the quota in the contract, and that the state was in danger of being sued by Seetec/Turas Nua.

The first solution was to keep sending the same people back through the activation system, but even that apparently wasn’t enough, though many people were sent through the system up to 4 times.

So, the CE schemes became “real” jobs, and were tied by the minister to an agreement that all CE schemes must be accessed via Seetec/Turas Nua.

The majority of CE schemes last for 12 months (There are some exceptions), the same period of time that qualifies as a period of “sustainable” employment in JobPath.

Since all CE schemes must now be accessed via Seetec/Turas Nua, it is reasonable to assume that all placements on CE would be regarded as sustainable employments “created” by Seetec/Turas Nua, with each new start-up qualifying for a full payment from the DEASP to Seetec/Turas Nua of €3,718 per “client” assigned to community work.

Community work that those workers could probably have accessed anyway without any help from the middlemen JobPath organisations.

Since there are 21,000 CE places in Ireland at any one time, Fine Gael’s policy change on CE comes to a potential windfall to Seetec/Turas of €86m. And since the majority of CE schemes only last one year, this is potentially an annual turnover of €86m to Seetec/Turas Nua for simply routing new CE placements annually through their system.

Who says there’s no such thing as free money?

Here we have a system that compels Irish people to live and work in poverty, serving private organisations, while the elite deliberately turns a blind eye, supporting the injustice with a prejudice that they’re all “scammers” anyway, and don’t deserve any better.

What a strange echo that narrative makes. It’s not unlike the system of industrial schools and Magdalene laundries of old.

But the richest irony is that many of those people working on those schemes, in an act of desperation, like to see themselves as being in “real” jobs; among the elect of Varadkar’s early-rising heroes, they are often quicker than most to castigate “welfare cheats”.

No one wants to be at the bottom of this Irish class system, with contempt constantly heaped on you from above. But this time the low paid workers have not been spared the insults of the elite. They are not on Varadkar’s team after all.

They are still perceived as scammers, no different than the “welfare cheats” they agreed to scorn and condemn in return for pitiful jobs that don’t even deliver a living wage. They’ve been duped and dismissed, their silence and obedience taken for granted, their labour sold cheaply.

It will be interesting to see will that 240,000 votes ever find expression.

18 thoughts on “Eamonn Kelly: No Picnic”