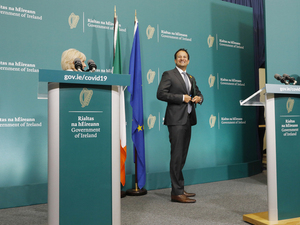 Tempting though it is to present you today with yet another analysis piece about the government formation process, I will resist.

My reasons are twofold:

1. There is a 50/50 chance the process will still be ongoing this time next week

2. We are in such a state of flux with events moving faster than ever, there is every chance that the facts underpinning any analysis could change while I write it up.

OK, reason one is a bit flippant. I would be extremely surprised if an agreed document, though not necessarily one agreed by everyone, has not emerged by week’s end.

The one thing I can say with any certainty today is that there are so many moving parts and shifting gears that no one outcome, or series of outcomes, is certain.

No party can take its internal vote for granted. Beware those smiling faces and soothing voices telling you that it will be alright on the night – it might not be.

Party activists and councillors are a wily lot. They will want the arguments for and against presented to them. Party HQs who try to present one side only could face a backlash.

Voters across all three parties – and each party is handling this differently – will take many factors, including ones not included in the Programme for Government, into account when deciding the future of the programme and perhaps their party.

As of today that seems unlikely.

Perhaps the platform for Catherine Martin’s leadership bid will be: vote for the deal, but vote for me as the better person to deliver it.

But that is a confused and inelegant message. It is certainly a harder sell than the much simpler: reject the deal and reject the leader who walked us into this.

Come to think of it, that may well be a slogan which folks in other parties might want to consider if and when they decide to change leaders.

I want, instead, to focus briefly on two other old familiar issues/challenges/opportunities which will still be around if, and when, we eventually get a new government in place.

The first is Brexit. The second is the break-up of the UK, though this an issue which arises logically from the first.

While we have been focused sensibly and correctly on tackling Covid-19 and trying to have socially distant government formation talks, the EU and UK negotiators have been busy meeting up virtually and responsibly but managing to progress nothing.

Recall that the UK, which left the EU on January 31st last, decided unilaterally that it would only allow an 11-month transition period. This was the maximum time it would permit for to negotiate its future trading arrangements with the EU.

We are not far off the mid-point of that transition and neither side is anywhere closer to agreeing those future trading arrangements. If anything the process is going the other way. In his June 5th press conference assessing the current state of negotiations the EU’s chief negotiator Michel Barnier said:

“In all areas, the UK continues to backtrack on the commitments it has undertaken”

He went on to say that the UK doesn’t want to talk about “cooperation on foreign policy, development and defence… I still don’t understand why”.

He is not the only one wondering why. Surely, one would think, as Johnson’s government set the short negotiation time frame before Covid-19 struck, it would not be unreasonable for the UK to seek an extension of the time frame for talks.

Not only would it be reasonable, it would be sensible and practical to get an extension, as Colum Eastwood MP and others have argued.

There are very real and potentially lethal consequences for people on this island, North and South. If there is no transition extension, then the UK will be a third country for data protection rules from January 1st next.

It will be outside the scope of GDPR and that will make the transfer of personal data to the UK impossible. This includes personal health data. What is the point of Covid-19 contact tracing apps North and South that cannot speak to each other and cannot share your personal data as you cross the border?

(See this UCL report for more detailed explanation of how complex and difficult EU/UK data transfers will be if the UK leaves without any agreement).

Sadly, as my colleague Tom Hayes has set out in this lengthy, but detailed analysis of what motivates brexiteers today, Johnson, Gove, Cummings and the other brexiteers cannot countenance a transition extension, as that would concede a real value to EU membership, and they can never do that.

But, as the laws of political physics dictate, to every action there is an equal and opposite reaction.

While it is not a commanding or irreversible lead, it shows a clear direction of travel with Yes to Independence having a 3pt lead over No by 48:45 even when you include the 7% Don’t Knows, an ever-dwindling cohort.

It is as if the occupants of Downing Street want to push Scotland out of the Union, closely followed by Northern Ireland and are happy to say or do whatever is needed to provoke voters into going.

Be it his mishandling of the UK’s Covid-19 response, the Brexit talks or the Dominic Cummings Durham drive fiasco, which was bizarrely blessed with the hashtag #Cummgate, Boris Johnson proves that when it comes to rousing passions he can do it harder, faster and probably quicker, than Alex Salmond ever managed.