Both Luke Kelly statues were vandalised last night. 😟 Thanks @pmacdublin who are currently on site cleaning Luke on Sth King Street.👏🏻👏🏻 #lukekelly pic.twitter.com/FbyFuysia4 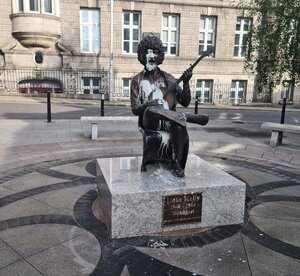 Gardaí are investigating after white paint was thrown on the marble bust on Guild Street at around 11pm last night – the sixth time it has been vandalised.

No arrests have been made in connection with the latest incident and gardaí say investigations are ongoing.

Meanwhile, the other statue of The Dubliners singer – located on South King Street, beside Stephen’s Green shopping centre – was also covered in white paint.

Betrayer To The Highest Bidder

Thank You For The Shades