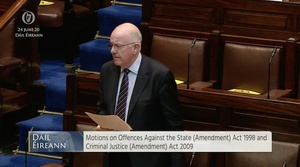 TDs are discussing the renewal of the Offences Against the State Act and the Criminal Justice Act 2009 in the Dáil.

The Minister for Justice has said work is ongoing in his department to bring forward a review of emergency laws aimed at tackling terrorism and the Offences Against the State Act will be part of that review.

Minister Flanagan said there remains a real and persistent threat from “Republican paramilitary organisations” on the island of Ireland…. 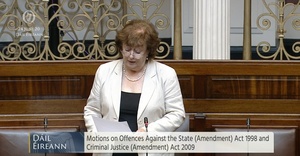 “Last year, Minister Flanagan himself said: “We all look forward to the day when the Special Criminal Court is no longer needed, but regrettably we are not there yet”

But isn’t that the point? If we don’t make moves now to ensure we get to the stage where it is no longer needed then every year we and those who come after us will be asked to walk in here and vote to extend its powers. That’s not good enough.

The challenge now is to equip our ordinary courts in a way that allows them to administer transparent justice safely and securely for all involved in proceedings.

Such a basic tenet of a civilised society should not be outside of our capabilities and that is why the amendment tabled by the Social Democrats today allows for a 5 year time-frame to phase out this archaic institution and replace it with a transparent system of justice.” 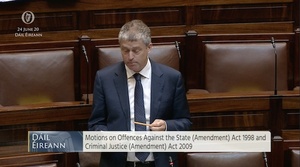 “Military courts were introduced in Ireland in 1939 and expanded in controversial circumstances in 1972. The Government asserted, as it was required to do under the Constitution, that the ordinary courts were ineffective to secure the proper administration of justice. The bogeyman of jury intimidation was raised.

Jury intimidation is the Irish criminal justice system’s equivalent to weapons of mass destruction. It is very easy to raise the issue, but where is the evidence for it? Is it in any of these reports? Has it ever been mentioned? Most of the Limerick gangland cases and many of the Crumlin and Drimnagh gang cases were dealt with by juries.

26 thoughts on “The Jury Is Still Out”