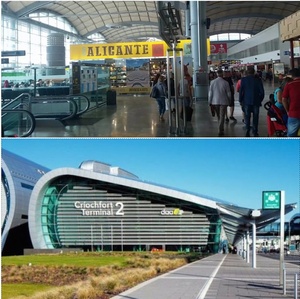 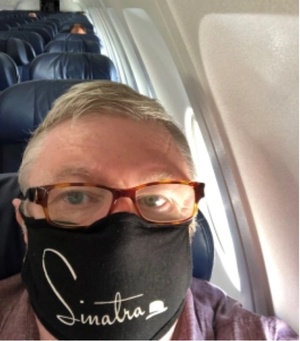 Derek Mooney (above) returning home to Dublin from Alicante, Spain

Amid the anger and confusion over air-travel restrictions, plus stories of people arriving at Dublin Airport and avoiding quarantine, I have chronicled my largely positive experiences of travelling by flight just under two weeks ago.

Only one part of my trip made me feel uneasy and that was my arrival back in Dublin.

At the end of June, I traveled to Alicante, Spain for a short return trip to visit my mother. My Parents moved to Spain in late 1999. My father died in 2011 and my mother decided to continue living in Spain.

I usually try to get over to visit her for a few days every two months, or so. My last such visit was in early February. I was then planning to visit in late April/early May, but the Covid19 restriction knocked those plans on the head.

I resolved to try to visit her as soon as travel quarantine* restrictions were lifted in Spain as staying there for 14 days would have been impractical. As I work from home I felt I could cope relatively easily with the 14 day quarantine on the Dublin return leg.

Fortunately, the Spanish government lifted the 14 days quarantine restrictions in late June. From that point on  people arriving in Spain were required to complete a detailed contact tracing form giving their country of origin and register an address at which they would be staying during their visit so Spanish health officials could trace them, if necessary.

It also asked several health questions, including listing any contact over the previous 14 days with persons who had contracted Covid-19. They also required those arriving to undergo a temperature check/scan.

So, as I near the end of my 14-day post trip quarantine, here is a brief description of my experiences of both departures and arrivals at both Dublin and Alicante airports.

It was an early morning flight. Arriving at T2, I was booked on an Aer Lingus flight and was greeted by an airport staff member who urged me to use the hand sanitizer and reminded me that masks/face coverings must be worn at all times inside the Terminal.

The security area was not busy, but there were clear markings on the ground to show you the 2M social distancing required on the queue. I had checked in online so I scanned the bar code at the security check and went through to the scanners to check my hand luggage etc.

No issues here. All staff were wearing masks and gloves and very organised. Again there were plenty of hand sanitisers. (Up to my February trip I had a near 100% record of always being randomly selected for the added drug swab test – so I was shocked when I wasn’t picked this time).

I went direct to the departures gate. The seats were clearly marked to ensure social distancing. Aer Lingus commenced boarding early and called passengers by seat rows (4/5 rows at a time). The flight was approx. 70% full, mainly family groups and couples. Everyone had masks. The staff were very attentive and professional. They handed out the detailed 2-page Spanish contact tracing form.

Boarding was calm and socially distanced. The flight was relaxed. Disembarkation at Alicante was just as calm and well managed with passengers cooperating with both staff and each other.

Upon arriving I saw that Alicante airport officials had changed the arrivals layout to allow plenty of space for passengers to socially distance (1.5m in Spain as opposed to 2m in Ireland) when going through passport check. Once you were past passport control you went down the escalator to the baggage hall, there you found two identical channels set up by the local health authority.

In each channel were local officials (who also spoke English) who wear wearing face coverings/visors. They collected and checked through your contact tracing form to see if you had ticked that you had contact with anyone with Covid-19 or were exhibiting symptoms, runny nose, persistent cough.

You then went along the channel to the temperature check/scan area – this was done at a distance. When the official was satisfied that you were not muy caliente, you were waved through and then collected your bags and left.

Security guards in the arrivals halls kept people moving and exiting the building – there were hand sanitizer stations everywhere across the airport.

As with Dublin Airport there were airport security guards at each entrance to the departure area. They told passengers to use the hand sanitizer and to wear face masks/coverings at all times.

The security area was a bit busier than in Dublin. There were clear markings on the ground to show you the 1.5M social distancing required on the queue. All staff were wearing masks and gloves and monitored the queue. Again there were plenty of hand sanitisers. Passed through the security check with minimal fuss or problem.

Though there were some cafes open I went direct to my departure gate. As with Dublin the seats were clearly marked to ensure social distancing. As it turned out there was no issue with boarding, which was done via steps and not a jetbridge, as there were just 9 passengers booked on the flight. Each of us wore masks. The flight staff were very attentive.

The flight crew were relaxed and professional. About 45 minutes before landing in Dublin they handed out the 1-page Irish Covid-19 contact form, albeit a very poorly photocopied version. Disembarkation at T2 was fine, it seemed ours was the only flight arriving around that time.

This is the part of the trip that caused me concern. Not because anything happened or went wrong, but because there was nothing. You walked off the flight. Went to passport control. You handed the official there your passport/ID and the completed form. You lowered your mask so they could identify you… and that was it.

Yes there were hand sanitizers and some yellow and black HSE notices, but nothing else. No health officials. No temperature scans. Nothing. Though I had signed a document committing to self-quarantining, there was no question about how I was going to travel on from the airport (the answer by the way was bus and train!

There were notices in the T2 Arrivals hall that everything there was closed, including the bus stop and taxi rank, and so you should walk to T1.

On a side note, this was before the requirement to wear face coverings on public transport was made mandatory. While the four people who boarded the bus at Dublin Airport each wore masks, only 10% of those who boarded thereafter were wearing them. Curiously, that percentage rose to 75% on the Dart from Malahide to home.

These are my observations. While Dublin Airport T2 was well set up for those departing, that is not the case for arrivals.

Maybe it was a one-off experience. Maybe the fact that there were only 9 of us on the flight and no other flights arriving at that time meant it was not cost effective to have a HSE/health authority presence at the airport, but even so, the casual approach to those arriving on the day meant that this was the only leg of my short return journey during which I felt uneasy.

OK Rant over and so too (well, almost) is my self-isolation.

40 thoughts on “Derek Mooney: To Spain And Back”