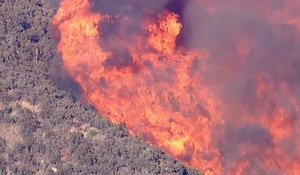 Fire tornado. Insane winds just picked up. Mass evacuations everyone is getting out of here. #LakeFire @FOXLA pic.twitter.com/WNTsqePd5t

Not enough attention is being given to the major #LakeFire in California. It’s only 4 hours old, and 11,000+ acres are gone.

This could be a real ecological disaster for the Angeles Nat. Forest. This is an incredibly hot, climate change helped, leave-nothing-behind type inferno. pic.twitter.com/nilFeNoDfr

A fast-moving brush fire has scorched about 10,000 acres prompting evacuations for at least 100 homes.

Dogs Sticking Their Heads Out Of Car Windows In Slow-Motion To The Theme From The O.C.